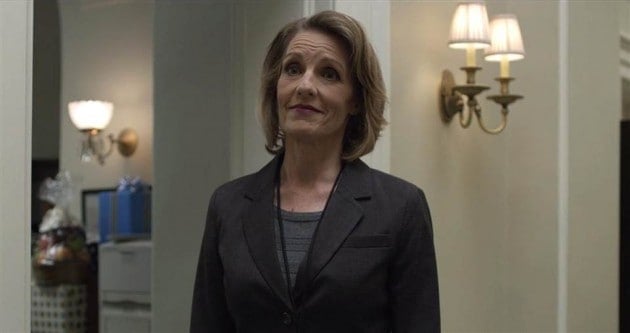 Elizabeth Norment died October 13 at Memorial Sloan Kettering Cancer Center in New York, according to her sister Kate. She had most recently (and most famously)Â appeared as Nancy Kaufberger, a sharp and talented secretary for Frank Underwood in the Netflix series House of Cards, who had been with him for his entire career. She has had other roles on television stretching back decades, including roles on Doogie Howser, M.D., Law & Order, and Blue Bloods. Norment attended the University of Chicago, graduated from Cornell University, and received an MFA from Yale University.

Beau Willimon, the showrunner of House of Cards, issued a statement, saying that “Everyone at House of Cards is deeply saddened by Elizabeth’s passing. She was a talented actress, a warm soul, and a passionate friend to us all.” Kevin Spacey, lead actor and executive producer, also tweeted “RIP Elizabeth Norment. We all loved her and she leaves a void in all of us here and HoC’s.” It is unknown how long she had bee suffering for, and her fight was not a public one.Â  We should all respect her wishes to keep her battle with cancer private and send our thoughts and prayers to her family and friends, who are sure to need them at a time like this.Â  Nancy Kaufberger, Norment’s House of Cards character, has long been one of my favorite minor characters in the show, and I am sure that her absence will be felt by a greatÂ number of people.Â  As Kevin Spacey said, Rest in Peace.