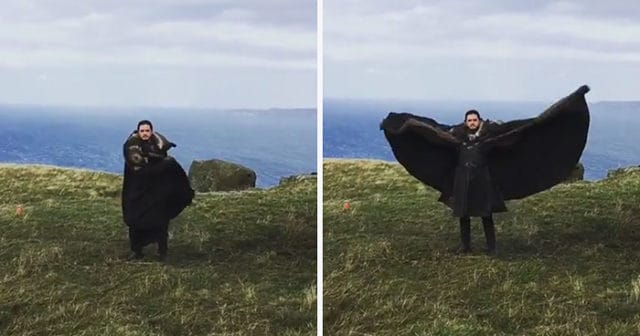 Game of Thrones isn’t all drudgery and war after all. Emilia Clarke has become known as more than just the Mother of Dragons and Breaker of Chains. Behind the scenes she’s also gained a reputation for being quite the prankster and taking the occasionally funny video of her costars. Most of them are usually good sports about it, including Kit Harrington who is posing above as a dragon, or a crow, depending upon how you want to take it.

He could just be being silly as well.

This kind of video is very heartening actually since it shows a lighter side of the cast that doesn’t focus entirely around the hard and very serious nature of the program. It shows that they like to have fun and engage in a little frivolity now and again and really it’s quite nice. Watching Kit Harrington flapping his cloak in such a manner almost gives rise to the thought that he’s pretending to be the Michael Keaton version of Batman or a very silly version of Dracula. But then neither of those are really represented by GoT so it’s more likely to assume that it has something to do with the latest episode in which Jon Snow was confronted by Drogon, who actually allowed the northerner to touch him.

The look on Daenerys’s face was priceless as she watched her favored dragon accept the touch of another person. She could have keeled over in surprise it would seem as Jon reacted without fear, placing his hand on Drogon’s scaly hide in an estimation of wonder and reverence. The dragon, for his part, accepted the touch and seemed to recognize Jon as someone that he recognized, no matter the fact that they had never been formally introduced. More and more the reality of Jon’s parentage is starting to come out and viewers are hoping against hope that this means that Dany’s forces and Jon’s can possibly come together and unite against Cersei.

At the very least they need to unite against the White Walkers, whom Jon is attempting to prove are real by going forth with a small band of warriors to capture one of the elusive creatures. The mission is essentially a suicide trip for at least one or more of the group, but if they are successful then they will credence to the very real threat that plagues the entire breadth of Westeros. At that point it will not matter who is against who, as it will be the living that need to unite against the dead.

An early prediction is that even when presented with the truth Cersei will not care, as she is more bent upon consolidating her hold upon the whole of Westeros than she is when it comes to caring for the fate of others. Jon and Dany will be more likely to take on the army of the dead on their own than they will to rely upon the Lannister forces.

But until all that drama ensues, here’s another look at the lighter side of the show.