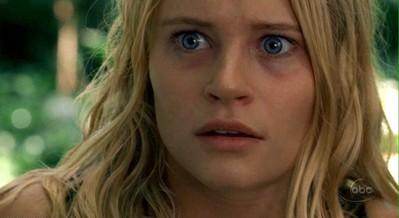 Even the cast of LOST are spoiler-phobes.

MTV.com spoke with actress Emilie de Ravin on Tuesday, in an interview posted on their website. The actress, who did not appear at all in season five, spoke of her return to the Island (and the series) in season 6. “It was kind of like riding a bike,” de Ravin said of her reprisal of the role. “I’d been playing her for four years.”

de Ravin also let loose some spoiler-ful information regarding Claire’s return, which will soon be covered in a post by our correspondent Spoiler Guy (among other delicious LOST spoilers). Though de Ravin was jokingly afraid of “being murdered in my sleep due to exposing secrets of the series,” she wasn’t afraid to tell readers of how she had spent her time away from the show — or rather, how she hadn’t spent her time away.

“I made a conscious decision not to watch season five because Claire wasn’t there,” the actress spilled. “I thought it was interesting to not be too in touch with what was going on with the other characters. That gave another side to the mystery for me, but there’s already enough bloody mystery going on, isn’t there? Even more!”

That’s a unique position on the show, especially coming from one of the main cast members. Does that mean she doesn’t have a burning need for her questions to be answered? Quite contrarily. The actress, in closing, revealed one mystery she’s still dying to see answered during the show’s final season.

“There was a lot of talk about how Claire’s baby, Aaron, was a big key to why we’re all there and what’s going to happen and that he could be the element of letting us know that. As of now, I don’t know, but there’s something interesting going on there. I want to know!”