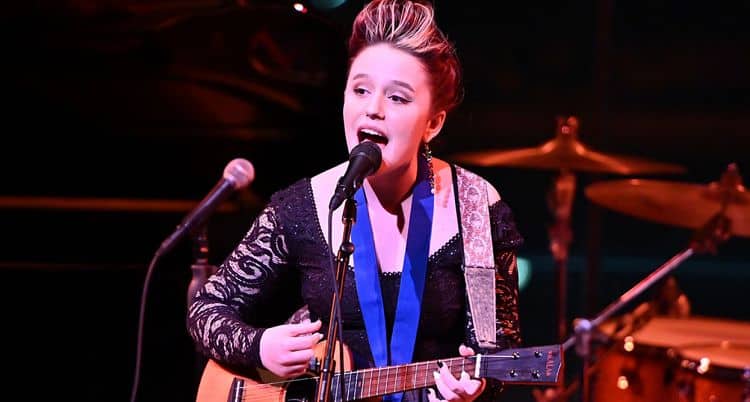 EmiSunshine is only 16-years-old, but as soon as she steps on stage she carries herself with the confidence and grace of someone who has been performing for decades. The talented teen has dreamed of making it big in the music industry for her entire life, and that dream is currently in the process of coming true thanks to American Idol. Although her initial audition for the show wasn’t aired, she has been getting a lot of attention after her performance during the duet round. She and fellow contestant Alex Miller left everyone in awe with their cover of “Walk the Line” by Johnny Cash. The competition this season may be fierce, but EmiSunshine is proving that she has what it takes to go up against anyone. Keep reading to learn 10 things you didn’t know about EmiSunshine.

1. She Started Singing As A Baby

EmiSunshine has been singing since before she could talk. Her parents noticed that she seemed to have exceptional musical skills when she was only about nine months old. As she got a little older, she began singing in church and eventually started participating in local singing contests. Before she reached her teens she was already the talk of the town.

2. She Performed On The Today Show

As you may have been able to guess by the way she carried herself during her performance on Idol, Emisunshine is no stranger to performing in front of large audiences. When she was only nine, she was invited to perform on The Today Show after a YouTube video of her singing had previously gone viral.

3. She Already Has A Large Social Media Following

Despite Emisunshine’s young age, she isn’t new to the music industry. Over the last several years, she has built up a pretty solid fan base and she now has a large following across several social media platforms. She has more than 29,000 followers on Instagram and her Facebook page has 461,000 followers. She also has a YouTube channel with more than 30,000 subscribers.

Emisunshine’s voice has earned her a lot of praise over the years, and that praise has come from some pretty important places. Rolling Stone Magazine featured her in an article back in 2015 and it was clear that they thought very highly of the up-and-coming songstress.

Contestants can come on American Idol at almost any point in their careers. This means that some people are just getting started while others have already toured and released original music. EmiSunshine is definitely part of the second group. She’s no stranger to performing or recording. Emisunshine has already released six albums.

In the world of country music, the Grand Ole Opry is one of the most prized venues. Some people spend their entire careers hoping to get the chance to step foot on the Opry stage. For Emisunshine, however, this is something she can already say that she’s done. She made her debut performance at the Opry in 2014.

7. Sunshine Is Really A Part Of Her Name

When most people see the name EmiSunshine they automatically assume that it was created just for the sake of a stage name. While it is true that EmiSunshine is a stage name, it’s more closely connected to her real name than most people realize. Emisunshine’s first name is Emilie and her middle name is Sunshine.

8. She Was In An Episode Of Little Big Shots

To say that Emisunshine has been working hard for the last few years would be an understatement. She has been going full speed to try to establish herself. In 2018, she appeared in an episode of the kids’ talent show Little Big Shots and her performance got her a lot of attention from people all over the country.

9. She Has A Very Strong Support System

There are plenty of parents out there who would be horrified if their child said they wanted to actively pursue a professional music career. Emisunshine’s parents have never felt that way, though. Instead, they have always supported her dreams and they’ve been willing to do whatever it takes to help her make it. Emisunshine’s mom even quit her job as a nurse so that she could be more available to help with Emisunshine’s career.

10. She Isn’t The Only Musician In The Family

Talent like Emisunshine’s has to come from somewhere. Needless to say, she isn’t the only person in the family who has very impressive musical skills. Emisunshine’s father is also a musician and he plays the upright bass. Her brother plays the mandolin. Emisunshine also has an uncle who plays the drums. The group typically travels and performs together.