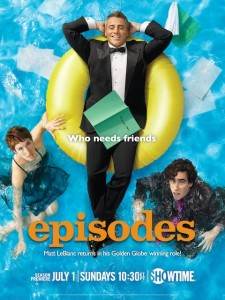 Just when you thought it was safe to write a comedy show in L.A., Showtime’s Episodes returns for a second season of showcasing that nothing is ever safe in Hollywood. Not even your dignity.

For the uninitiated, Episodes spins the tale of a British TV writing couple Sean and Beverly Lincoln (Stephen Mangan and Tasmin Greig, respectively), who are wooed by a TV exec named Merc Lepidus (John Pankow in a role that oozes with enough slime to jam a Ghostbuster proton-pack) into creating an American version of their hit UK program, Layman’s Boys. After moving to Los Angeles, the Lincolns discover that not only has Lepidus not seen the original show, but that the network wants to change it completely and put Matt LeBlanc (as a Golden Globe winning, fictionalized version of himself) as the lead star, much to the couple’s dismay. To say that “hilarity ensues afterwards” would be an understatement as Matt LeBlanc changes the couple’s lives for the worst, professionally and personally.

At the end of last season, the Lincolns’ marriage was left in shambles as Sean discovered Beverly slept with Matt in a drunken rage, which was brought on by Bev believing that Sean was having an affair with Matt’s Pucks costar Morning Randolph (Mircea Monroe). Just as this secret hit the fan, the trio found out that the pilot for Pucks was picked up by the network, forcing the Lincolns to stay in L.A. and work together with Matt without killing him.

The second season premiere of Episodes picked up four months later with the premiere of Pucks around the corner and production in full swing. Seemingly things on the set looked “normal” and smooth on the surface, but as the episode played on, you clearly saw that egos were still bruised and a lot happened since Pucks was picked up to series. As for the comedy? Still golden.

After winning the Golden Globe, Matt LeBlanc returned to Episodes still a complete imbecile, but a wounded one at that. His superego was hit with a block of kryptonite that he struggled with during most of the premiere, and it shows greatly. The Hurricane Matt from last season finally stopped and surveyed the damage he’s brought to those around him, namely the Lincolns. But did that mean Matt learned the error of his ways? If getting excited about a sexual act with Lepidus’s blind wife was any indication, not by a long shot.

As for Beverly and Sean, the writing duo handled their situation better than any Hollywood couple in the history of Hollywood couples. The way the show slowly revealed their split was well executed, but even after that knowledge was dropped on the audience, you could still sense something was still lingering between them. The only problem now is Morning has an open to finally pursue Sean and that can get very, very messy in the long run.

Loving how Carol (Kathleen Rose Perkins) has went from a vapid, studio exec to a valid confidante for Beverly and vice versa. The fact that’s she’s still with Merc Lepidus is beyond comprehension, especially after he took Carol ring shopping… for his blind wife. That’s below sleezeball level and hopefully Merc will get his just desserts now that his wife Jamie has set her eyes (no pun intended) on Matt.

Finally, there is the business about the ratings for the series premiere of Pucks. Yeah, that’s not the end of that little running gag. Highly profiled/hyped new shows almost always premieres with spectacular ratings. But as Morning explained, people are only tuning in for a sample to what the show has to offer and the only way to know if a show is a hit really comes from consecutive episodes. Plus, the reviews for Pucks weren’t helping matters either. I think I smell a crisis on the set of Pucks in the coming weeks; as if the stress levels aren’t already high in that place.

The trinity that is LeBlanc, Greig, and Magman still owns the show despite their roles shifting a bit in terms of their comfort zones, which is a good thing. The more the dynamics change, the more we see from these three. As a whole, Episodes still has that same charm and acerbic blend of British and American humor that makes the show a must-see live and then later on your DVR again and again.

What did you think about tonight’s premiere of Episodes? 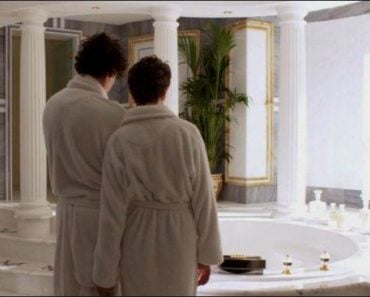 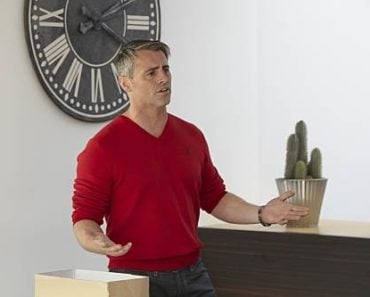 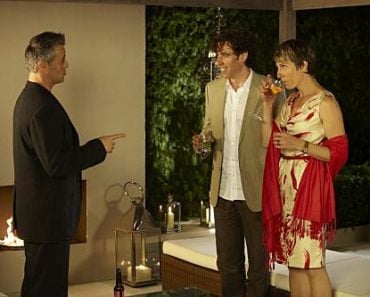