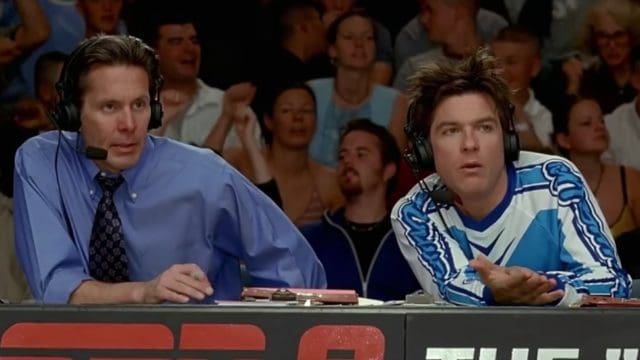 I think my brain just fried thinking of this. Is it with an overabundance of joy or with the fact that the Ocho would showcase some of the DUMBEST SPORTS KNOWN TO MANKIND? I kind of think it’s the former.

Of course some of the sports they show seem dumb, and there’s a reason. If you watched the movie Dodgeball then you would have seen a few clips of the Ocho and the sports that it showed. If it’s almost a sport, it’s on the Ocho. People no longer have to wonder what it might be like to watch the Ocho though, because for one day in August it will be coming to live TV. What it will cover is going to be somewhere between amazing and a string of expletives that I’ll leave up to the viewer to utter as they try to sort out just what’s going on. But let’s be honest, it probably won’t be boring.

Everything the Ocho shows will be a rerun.

This isn’t a live show keep in mind, but more of a chance for ESPN to showcase just a few of the odder tournaments and sports they’ve had to cover over the years. In essence it’s more of a highlight reel of the weird and unusual sports that do exist around the world. Like the Moxie games for instance. This sport involves dodgeball, juggling, martial arts, volleyball, table tennis, and soccer all rolled into one neat little package. How they avoid injury is anyone’s guess if they use so many different elements, but the entertainment value is obviously there. Then there’s disc golf, which is bound to be a lot more interesting than actual golf considering that you have to throw something on purpose. When was the last time you saw a golfer throw anything?

There will be no Pepper or Cotton.

Dry your eyes because Gary Cole and Jason Bateman will not be commentating this time. I know, I know, I was just as disappointed because I was really hoping to hear something like “That’s a bold strategy Cotton”, or even “Pepper needs new shorts!” during the commentary. Be strong though and enjoy.

There WILL be a dodgeball tournament.

Come on now, if you didn’t expect this then shame, shame, shame. The Ocho was after all showcased on Dodgeball: A True Underdog Story. If you didn’t expect this to be shown on the airing of the Ocho then you weren’t paying attention. But yes, there is such a thing as a dodgeball tournament and yes, the Ocho will be covering it. Get that? Ocho, dodgeball, yes, it’s happening. Just wanted to make sure.

So now to the burning question: Why is the Ocho coming to TV? Well, baseball is wrapping up, the regular NFL season is still a week or so away, and college football hasn’t started yet. We’ve got to have something to take up our time, right? What better way to get ready for our favorite sports than watching sports that have little to no chance of ever being mainstream? You in? I’m in.