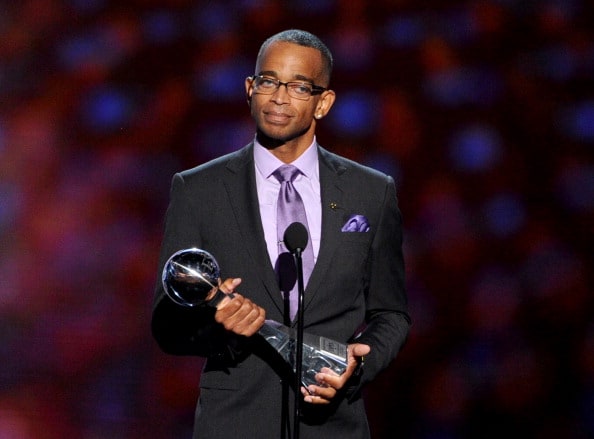 Longtime ESPN anchor Stuart Scott died Sunday morning after a seven-year battle with cancer. He was 49.

Scott became a member of the ESPN team in 1993. His first on-camera work was on ESPN2’sÂ SportsSmash, and not long after, when Keith Obermann leftÂ SportsNightÂ and moved over toÂ SportsCenter, Scott took his place as anchor on the ESPN2 show.

“He was like a ball of fire walking in the door,” ESPN SVP Mark GrossÂ said about Scott joining the network. “I had never met anybody like Stuart Scott.”

In addition to his work onÂ SportsSmash, SportsNight and SportsCenter, Scott was also a part of ESPN’s Monday Night CountdownÂ and ABC’s NBA coverage. DuringÂ his 21-year career on the network, he interviewed two different presidents, Bill Clinton and Barack Obama, and sat down with many iconic sports figures, including Tiger Woods and Michael Jordan.

However, Scott is probably most remembered for the personality that he brought to his coverage on ESPN. The infamous anchor coined numerous catchphrases throughout his career, including hisÂ trademarkÂ “Boo-Yah!” and “As cool as the other side of the pillow.”

At this summer’s ESPYs awards ceremony in July, Scott accepted theÂ the Jimmy V Award for Perseverance after having just recently undergone more surgery, but he was able to walk onto the stage and deliver a fantastic speech that received a standing ovation.

“When you die, it does not mean that you lose to cancer,” Scott said. “You beat cancer by how you live, why you live, and in the manner in which you live.”