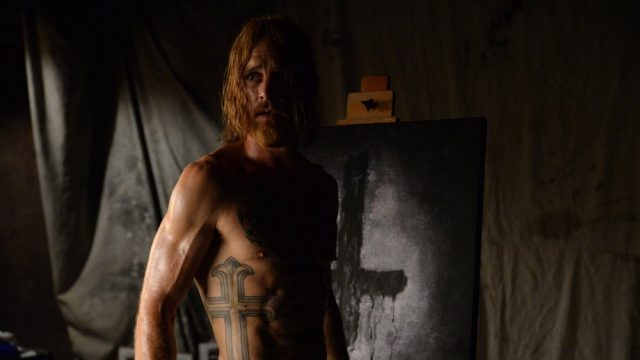 I’m a huge fan of Ethan Embry and I have to say I’m pretty excited to see him in a starring role.Â  Embry’s had a very interesting acting career that started at a really young age when he starred in Dutch with Ed O’Neill.Â  I happen to love that movie by the way.Â  The only other movie where Embry was technically a star was Can’t Hardly Wait.Â Â Â  Embry was really good at playing the awkward high school guy (which he also did in Empire Records).

But to say that his career has been diverse since the year 2000 would be an understatement.Â  He’s definitely bounced around from TV show part to TV show part and the occasional role in a movie.Â  But at 38 it appears that Embry’s back and has his chance to be a star again with “The Devil’s Candy.”

Embry stars as a “truggling artist and metalhead who moves with his wife (Shiri Appleby) and daughter (Kiara Glasco) to a new house with a grisly history in rural Texas. Things begin to unravel for the family with the appearance of Ray (Pruitt Taylor Vince), a previous occupant of the abode and all-around disturbed-seeming personage.”

The trailer is enough to give you chills and for horror movie buffs this could be dark horse.Â  Plus Embry is insanely ripped in this film.Â  I’m rooting for him.