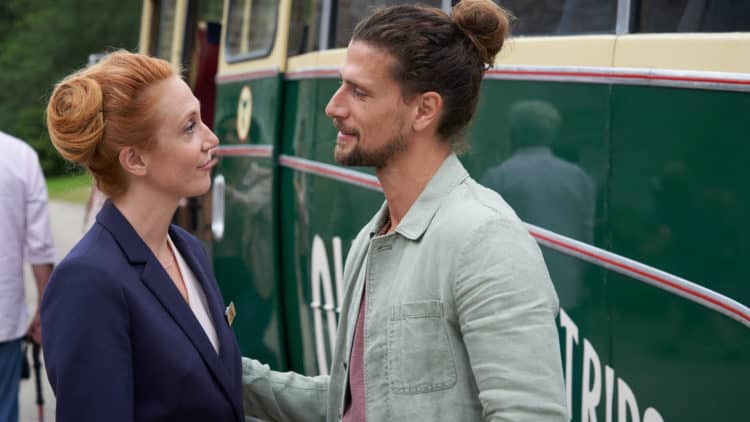 Eva Verena Müller’s acting journey has definitely been an interesting one. She didn’t make her first on screen appearance until she was in her early 30s, however, within just a few years, she was working her way up in the German entertainment industry. After years of appearing in German TV shows and films, she got the opportunity of a lifetime when she was cast in the new Netflix series, Barbarians. The show was originally filmed in German but has been dubbed in several other languages. Now on the brink of international stardom, there are people all over the world who are praising her performance in the series  Continue reading for 10 things you didn’t know about Eva Verena Müller.

Acting has always been Eva’s primary passion, but as someone who is a performer to her core, there are other ways Eva likes to express herself creatively. Another one of her favorite methods is through dance. She has been trained in several styles of dance including modern and jazz.

Even though Eva grew up in a city, she has always been the type of person who loves spending time in nature. Whether it be going for a walk or exploring a nearby forest, Eva loves to be outside and she is a firm believer that being in nature has lots of positive health benefits.

3. She Doesn’t Have A Big Following On Social Media

Lots of actors rely on social media as a tool to help them connect with their existing fans and interact with new ones, however, Eva has not made social media a huge focus during her career. Although she does have an Instagram account, it hasn’t had any activity prior to 2020 and she only has a little more than 550 followers.

4. She Is Always Up For A Challenge

There are some people who are determined to spend their entire lives living within their comfort zone, but Eva isn’t one of those people. She has always loved to learn new things and she has never been the type to back down from a challenge whether that be in her acting career or other areas of her life.

5. She Is A Scientist

One of the most interesting things about Eva is that in addition to being an actress, she is also a scientist – a real one. She is working towards earning a doctorate in forest ecology. During an interview with Wissenschraft, Eva said that she has always been interest in learning more about nature. Eva is also passionate about physics.

6. She Believes There Is A Connection Between Acting And Empathy

Every actor has something different that they love about acting, and for Eva that thing is something that most people would never guess: empathy. She told Wissenchraft, “I love acting. There are few other professions that allow you to understand so strongly that everyone has good reasons to be who they are…I consider theater to be a social organ that promotes empathy and democracy.”

7. She Is A Formally Trained Actress

Once Eva decided that acting was what she wanted to do, she knew it was something that she had to take very seriously. In addition to her natural talent, she also received formal training. She studied acting at Folkwang University of the Arts in Germany from 2000 to 2004.

8. She Has Had An Extensive Theater Career

If you look at Eva’s on screen resume, you may think that her professional acting career got off to a late start, but that isn’t the case. Prior to making the transition to screen opportunities, Eva had a very successful theater career that includes more than two dozen stage productions. Even in recent years, she has continued to do theater work. Her most recent performance was in a 2018-2019 production of The Parallel World.

Eva us truly the real deal when it comes to acting and her hard work hasn’t gone unrecognized by other people in the industry. Over the course of her career, Eva has taken home many awards for her stage and screen work. Her most recent award was a 2019 German Film Award for Most Popular Film.

10. She Is A Private Person

Eva may love to act, but she doesn’t seem to have those same warm and fuzzy feelings when it comes to fame. Instead, she appears to really enjoy her privacy. When she is in the spotlight, she likes to keep the focus on what she’s doing professionally instead of what’s going on in her personal life.