Home
NBC
The Event 1.03 “Protect Them from the Truth” Review

Last week I mentioned how this show has now played the alien card, it’s a whole new ball game. I spent some of the interim week pondering whether that assessment was actually correct. Looking back at some of the dialogue, it is sketchy at best. The captives are referred to as being ‘not of terrestrial origin’. Rather than a spacecraft, their transportation is described as being an aircraft. Blake says that they may share common ancestors with us. This certainly leaves things nicely ambiguous. Or for some, maddeningly ambiguous. I guess that’s the fun of The Event.

And fun it is. 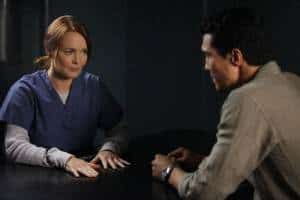 Having read a few reviews and seen a lot of disenchanted comments, I find myself wondering if all of the promotion citing this as ‘…if Lost and 24 had a baby!’– and other such proclamations — actually worked against expectations. The Event, if the evidence of the third episode is anything to go by, is meant to be a large, pulpy, sometimes laugh-out-loud silly, action conspiracy romp. Not in a campy way, but in a ‘turn your brain off’way. I usually hate that phrase, but I think The Event is fully aware of what it is, and does so in an intelligent way.

Episode three sees Sean and the sceptical female FBI agent barely survive after an RV managed to drive right into the agent’s car and kill the male agent (whoever that RV driver was, he needs a new pair of glasses — it was a long empty road!). Sean helps the agent escape the flaming wreckage — which is nice of him — drives her to a motel, and then sneaks off with her laptop just as the FBI cavalry arrives. In a clever (albeit somewhat predictable) turn of events, Sean had actually hidden in the agent’s trunk to gain access to the FBI field office so he could do a facial recognition search on the woman that had kidnapped his girlfriend, Leila. D.B. Sweeney’s henchman then turn up to kill Sean, but sceptical female agent manages to take one down while Sean hits the other over the head with a fire hydrant. Now they’re best buddies! Hooray!

Just typing that paragraph made my brain wrinkle a little. But that is The Event in a nutshell. It’s a little bit silly, a lot unbelievable, but I’m kinda excited to be along for the crazy ride.

Yet again, the other side of the story isn’t quite as engrossing. My guess is that this is mostly down to how vague it all is. Even the title of the episode talks about protecting people from the truth — and I’ve just checked Google Translate, that actually means ‘protect the audience from the truth’. This episode sees the introduction of Clea DuVall as Maya, the girlfriend of one of the ‘aliens’, William, who is about to make a deal with the Government to give up of the secrets we want to hear. The dirty damn traitor. In a scene that we all saw coming from a mile off (because answers simply don’t come that easy in a mystery series), Maya smuggles a shiv into William’s plush, heavily guarded hotel room and stabs him. I wish I had a girlfriend that cared that much. It’s one of those scenes that will heavily divide the audience — you’ll either roll your eyes at the plot hole (why didn’t the guards frisk her?) and decide this show isn’t for you, or just go along with the silliness. Maybe I’m a sucker, but I’m happy to go along with it.

If all of the insanity this episode throws at you isn’t enough, we get the final scene where all of the supposedly dead Flight 514 victims wake up. Yes, we’re dealing with zombies now. Or maybe just annoyed actors who want longer contracts. So why were they temporarily dead in the first place? If the rogue aliens did this to them, what is their end game here? And why does Taylor Cole’s character remind me so much of Jodi Lyn O’Keefe’s from Prison Break?

It was another fun episode, but this week provided far less character development and far more action. The producers promised the characters would become more fleshed out and the flashbacks would be a part of that, but so far they seem more interested in throwing all of the mythology questions and answers into these early episodes. Is this their attempt at keeping the audience happy, so we aren’t frustrated? If it is, they’re playing a dangerous game — if this continues for too long, the audience will stop caring. Some may have already. B+

Join us next week for 1.04 “A Matter of Life and Death”. What will the show add next? Vampires? Mummies? Speculate on our forums.