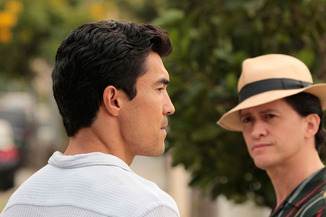 The Event continues its slight uptick in quality with “Loyalty”, an episode most notable for one of the best edited and choreographed action scenes I’ve ever experienced on a television set.

This week directly follows 1.05, with Sophia heading toward a meet with Thomas, while the government tracks her every move. Meanwhile, Sean and Leila steal the FBI agent’s car and head home to figure out just what Leila’s father knew, and what his connection is to the conspiracy.

In flashbacks we get a little love story, as we’re shown how double agent alien Simon Lee started to fall in love, settle down, and then have it ripped away by Thomas, who in no uncertain terms says either Simon moves on, or the girl dies. It’s the theme of the episode for Simon, as he deals with being discovered as the mole and helping Thomas and Sophia escape, knowing that now he’s going to have to move on once more. I’m not really a fan of big love stories spanning the ages when we barely know either of the characters involved, but it was executed quite well here, with some fine acting by Ian Anthony Dale.

Sean and Leila search her home and find evidence that shows her father was actively looking into the cover up in Alaska. They meet (after a brief moment involving a gun) with a crazed journalist (Paula Malcomson, who’s pretty much everywhere right now), who brings them up to speed with the rest of the audience — the crashed plane was carrying aliens. Things should get pretty interesting now both sides of the story are learning of each other’s existence.

But the best part of the episode was the finale, as we go out with a bang (or the implosion version of a bang — a bong?), as a portal opens up beneath the warehouse Thomas and Sophia escape from, leaving Simon attempting to get himself and the heavily armed FBI strike team out. The scenes of the building falling down around them, with explosions, implosions, sparks flying, hurdling debris, and a piece of metal impaling one of the team’s legs, were wonderfully filmed. Credit must go to director Jonas Pate (who co-created G vs E and Surface with his brother, and has also directed for Battlestar Galactica, Caprica, and Chuck). It was a thrilling sequence, although the dwindling audience numbers suggest few even saw it. It’s a shame, as The Event still has plenty to offer, even through the more groan-worthy moments and wonky plot holes.

Slowly but surely the characters are becoming more fleshed out, while the action escalates and the characters all start to learn about the conspiracy. There’s still a lot to face-palm at, but if it keeps up this level of entertainment then it’s easy to overlook. B+

Come discuss the show in our forums.