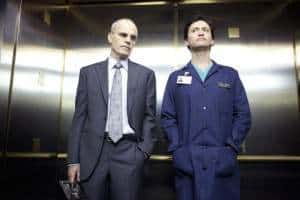 The Event returns from a brief hiatus with an episode mostly centred on Blake Sterling’s backstory, where we learn he was romanced by a Russian operative who had to be killed by his father when he was unable to do what had to be done. It’s what lead to Blake’s lack of emotion and his stoic, cynical take on things, which is evidence that the show is now getting a grip on its character development (even if the structure is lifted so blatantly from Lost). I think I preferred the almost chaotic nature of the pilot, zipping around timelines and keeping an energetic pace. It was messy, but at least it was different.

While the flashback story was quite good, its connection to Blake’s current actions were a little more tenuous. Blake wasn’t really at the centre of the action, which gave the episode a lopsided feel. However, it should be interesting to see how Blake reacts when he discovers Simon Lee really is the mole, and that he’s sent an innocent man into a nasty future filled with torture and darkened rooms. Can you say waterboard?

We also learned that Sophia is Thomas’ mother. Or at least, that’s what he calls her. Could it be a non-literal interpretation? Is mother their word for President or leader? Or is she a mother in the alien sense of all of the other aliens came from her? Never let it be said that television shows don’t love their characters with mother issues. At least it’s not father issues, right Lost?

Sean and Leila are taken to a “guy with contacts” that helps Sean do some sort of geeky web search to work out what a list of names and numbers in one of Leila’s father’s notebooks means. Turns out the names are all 7 year old girls who have disappeared. We then see the introduction of the great Hal Holbrook as Dempsey, the mysterious man giving the orders to Leila’s kidnappers. In a creepy final scene more reminiscent of something from The Twilight Zone we see the previously mentioned 7 year old girls all held in a small room, with weird deformed old-person faces. What deranged experiments is Dempsey performing on these girls, and how long before Leila’s sister is next? And how does it relate to the aliens? My guess: Dempsey is attempting to use the alien DNA to discover how they’re able to live so long without ageing. Unsuccessfully, it seems.

Overall this episode wasn’t as strong as the previous outing. The disparate stories are starting to become a little more clear, though with more answers comes the requisite collection of new questions. The Event continues to be a somewhat muddled show, verging from the groan-worthy to the explosive to the fast-paced to the frustratingly slow all within the space of one episode. It’s certainly entertaining, I’ll give it that. B-

Have you tuned out, or are you willing to give The Event more chances to impress? Discuss the show on our forums