Home
NBC
The Event 1.10 “Everything Will Change” Review 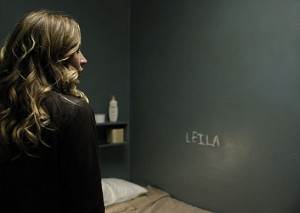 And so we reach the fall finale of The Event. It’s been an… interesting ride so far. You could insert your own adjective into that sentence. Random? Messy? Fast-paced? Inconsistent? Exciting? Morose? Ridiculous? All of the above, perhaps? It’s certainly turned into a show you either love or you hate. So how did the finale fair?

Sean and Leila’s journey takes them to the hospital where Leila’s sister is being held, only when they finally sneak into the basement (using a keycard stolen from the man that was sent by Dempsey to grab Leila in the previous episode) all of the kidnapped girls are gone. The pair search a records room, where all of the files have been burned. Conveniently only two folders contain information that hasn’t been ruined. One shows a series of pictures of the father from the previous episode throughout the past 60 years, proving he is one of the aliens. The next folder shows a similar set of pictures of Leila’s father. Twist! So it looks like Dempsey’s people weren’t just experimenting on random girls, but girls born of alien fathers. This certainly helps tie the two sides of the story together in an intriguing way.

Meanwhile, Thomas and Isabel escalate their plans after Sophia discovers Thomas has a hidden bank account. At the same time, the President’s security staff find a missile silo in a desert in some foreign country — which is about ready to fire a nuclear missile, which they assume is headed right toward the United States. Is this Thomas’ endgame? But just when we think there’s going to be some massive destruction, the missile heads straight into space, while censors detect there’s actually no nuclear material on board. The missile opens up to reveal a communications satellite, and it’s sending a message into space. What the hell is going on? Why are Thomas and Isabel (presumably) contacting their people? Is it to send some kind of invasion fleet? To initiate some part of the plan to get home?

This week’s story is kept clean and simple, focussing on giving us one huge answer and one huge mystery, hooking the audience into coming back next year. While the story keeps moving, the character development is nowhere to be seen. We got a lot of promises that we’d find out more about the cast, but the first 10 episodes have mostly been an exercise in “and then…”, constantly throwing plot at the wall to see what sticks. In the end, this show feels a lot more like another FlashForward, which is a disappointment to me personally. The characters aren’t very compelling or sympathetic, and a lot of their motives are a mystery.

The plot holes are there for all to see. If Leila’s father is an alien, why didn’t the medical tests earlier in the season show this? Why didn’t the US government have any sort of alert system set up to see if any of the alien’s names were used (like the way terror suspects or such are tracked)? If Dempsey has always known Leila was an alien’s daughter, and clearly wanted to kidnap her for the tests eventually, why go through all of the earlier nonsense with Sean? Why on Earth did Dempsey’s people only do superficial damage to top secret files? Is it really that hard to destroy them?

I’ve come to accept that The Event isn’t going to be some high art. It has lived up to the expectations I had for it after the pilot. I’ve toyed with the idea of quitting watching. But I’m a bit of a sucker, so I’ll probably be back when the show returns in about 4 months time. I just wonder how much of the rest of the audience will come back too. B

Why not discuss the show in our forums.