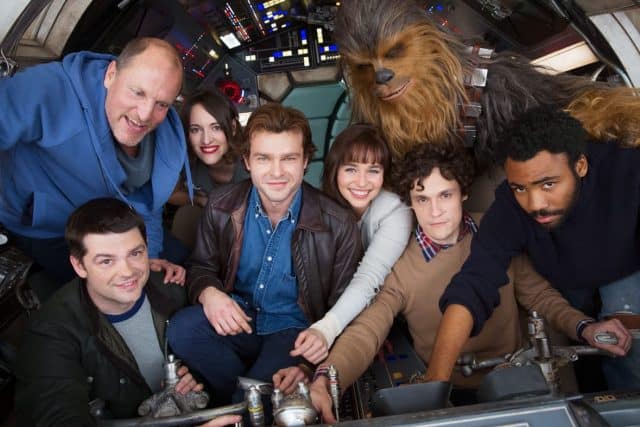 It certainly didn’t take long for the Star Wars movie universe to get back into the news.Â  As if we ever needed proof that a movie could exist out of the actual “Star Wars” movies, Rogue One brought in over $1 billion.Â  Why do I bring this up?Â  Because a Han Solo movie may very well top that.Â  People are loving the cast already and this new image should only help that cause.Â Â  While we’re not sure what Star Wars has in store for us beyond the year 2019, I think it’s safe to say we’re covered for the next two years.Â  Speaking of a Han Solo movie.Â Â  According to Screenrant

A main quartet consisting of Alden Ehrenreich (Han Solo), Donald Glover (Lando Calrissian), Emilia Clarke (the mysterious female lead), and Woody Harrelson (Han’s mentor) has been established for a while, and recently some other names became attached to the project.Â  Though Lucasfilm remained mum on the potential involvement of Phoebe Waller-Bridge and Thandie Newton when the rumors first popped up, the studio has now confirmed they’re inÂ Han Solo with the release of an official cast photo.

In a recent release on the official Star Wars site, we’ve found out the principal photography has begun on the movie.Â Â  As such, they’ve posted a picture of Lord and Miller with most of the main cast assembled in theÂ Millennium Falcon.

Is anyone else having a hard time picturing Woody Harrelson in a Star Wars movie?Â  I keep thinking of either his character from Cheers or Hunger Games someone finding their ways into his character.Â  P.S. this picture is great.