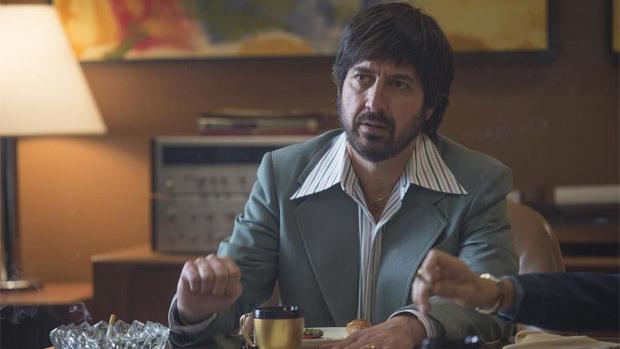 VinylÂ posits itself as a show about music, but it’s not; it’s a show about business,Â The Wolf of Wall StreetÂ translated to the early 1980’s, when cocaine and plunging necklines on male dress shirts was a big thing. Lovingly crafted to match the time period, everything aboutÂ VinylÂ works in creating a simpler show, one about a horrible white man and his struggle to maintain a legitimate business; if we were to make a Venn diagram of Terrence Winter and Martin Scorsese projects, Vinyl falls neatly in the middle. And that’s just the problem withÂ Vinyl: it’s way too comfortable playing it safe in its first three hours, offering scene after scene of the same tired schtick we’ve been watching for the last thirty years of their combined careers.

The most glaring issue with “Yesterday Once More” is the laughable “romance” it builds between Richie and Devon: her entire purpose in life has seemingly been to service Richie, from the moment they met, until the moment she suddenly becomes inspired by the smashed television and furniture he left around the house while in a coke-fueled rage. “Yesterday Once More” offers up yet another “party girl who got domesticated” story, with all the allusions of having her own career (as a photographer/model/actress, because of course) dissolving into a domestic life for a husband who clearly does not give a crap about his family. It’s not compelling television, from the “f*** cute” moment they share in a bathroom, to their love gazes at Andy Warhol’s party: and when Devon drives away without her children because she’s too busy drowning herself in Karen Carpenter music, VinylÂ continued to reveal just how shallow and predictable it would be.

The rest of “Yesterday Once More” is equally trite fair: despite the pilot ending with Richie assisting in the murder of another human being, he’s got more rock n’roll behavior on his mind. That means blowing lines in his office while wearing a Black Sabbath shirt, firing his A&R team and telling the Germans his entire company is relying on to pay their bills (or in the case of Zak’s ridiculous story, paying for a Bat Mitzvah for a family that hates him), and generally acting like the last type of human being you’d expect to have a tangible vision for his company – and despite the other three people running American Century fighting against it, they ultimately support the guy who just started binging cocaine and whiskey again. Because why not support him, right? They’ve only all recognized how their label has tanked in the last ten years, so I’m sure Richie’s ideas are worth having faith in.

And that’s the real problem withÂ VinylÂ as a whole: Richie’s entire life is just completely unbelievable, a series of predictable tropes about Italians in Brooklyn tryin’ to make some music. There’s Jewish people beating the one black male character on the show (who is now a drug dealer or something nefarious, of course), the Jewish wife and the Jewish daughter who spend all of Ray Romano’s money on a Bat Mitzvah, and a record producer who won’t listen to a woman, even though she’s doing exactly what their boss justÂ toldÂ them to do – nothing of consequence or meaning, in any sort of unique or original terms.Â VinylÂ is, at least through its first two hours, a show about a bad guy doing bad things and it working out fine – and although that’s certainly a trademark of Scorsese and Winter’s recent works, it doesn’t exactly provide the basis for a fun, engaging, deep television show. So far, VinylÂ isÂ full of stilted characters and a quickly-forming identity crisisÂ (is this show about music, or money?),Â hardly what appears to be the opening salvos of television’s first new prestige drama of 2016.