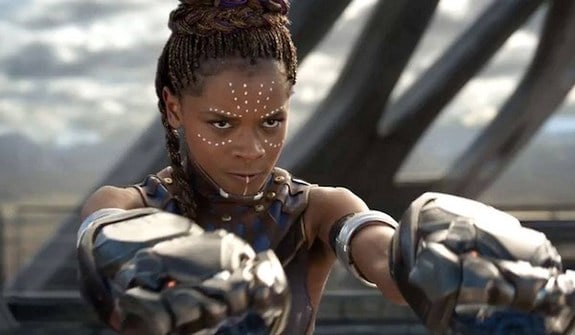 Shuri is not bound to have the most screen time even though in the comics she’s a fairly recurrent figure, but in the movie she will at least have a presence and be able to be recognized as family to the Black Panther. She’s already being hyped as one of the more fierce combatants in the film, as the royal elite of Wakanda all seem to be geniuses and fierce, unstoppable warriors. But apart from this she has yet to really experience the outside world as T’Challa has and so despite her ferocity she is largely untested. This takes nothing away from her while in her homeland, where she will be one of the deadliest people in existence.

It might be interesting to see if the role of Black Panther will one day transfer to the characters younger sister, but it won’t be anytime soon we’re guessing. In the meantime here’s what you need to know about Shuri.

5. She’s a fighter but she’s also a scientist.

As is customary for royals in Wakanda she highly trained and very capable of dishing out large amounts of punishment in a skilled and very controlled manner. But her physical prowess is only matched by her intellectual mastery as she is a skilled and venerated scientist within Wakanda that is a key to their continual growth and development as a nation.

4. She is the next in line for the mantle of Black Panther after T’Challa.

3. She’s responsible for much of Wakanda’s current technological superiority.

I mentioned she’s a scientist, yes? Well she is also one of the main reasons why Wakanda is still in a period of technological growth. With her genius and know-how she’s managed to aid her country in a way that is not quite up to the same standard as the Black Panther, but is still highly beneficial to the entire country.

2. In the comics she coveted the title of Black Panther.

Shuri badly wants to be the Black Panther but there are lines she will not cross to make it happen. She knows that the power of the Black Panther is not given, it is earned. But her brother understands her desire and ultimately tells her that while he is away she is in charge, and that the fate of Wakanda rests in her hands.

1. She is one of T’Challa’s fiercest allies.Â

Despite the fact that they bicker back and forth as siblings will do, Shuri and T’Challa know that they need one another and will always have each others back. Despite her desire for more authority she knows T’Challa is the rightful ruler and the person that Wakanda needs.

Shuri sounds like one person you wouldn’t want to test on her home turf. The Black Panther movie already looks like it might be worth seeing.