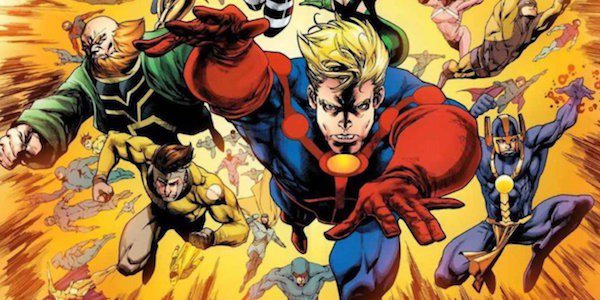 ScreenRant writer Cooper Hood is just one of many that are likely starting to wonder just what the upcoming Eternals movie is going to look like, and so far as we’ve all managed to read Angelina Jolie has already accepted a part in the movie, bringing her into the MCU. It also looks like Salma Hayek might soon be joining the fun but that’s not for certain just yet, and the rumor that Keanu Reeves might be vying for another role is also mostly rumor at this point. But with all rumors aside it’s important to know just who the Eternals are and why they’re even relevant to the MCU at this point. Being that they’re more of an obscure comic book group it’s hard to get too excited since the MCU really hasn’t gone so far as to shape the entire universe just yet, preferring to stick to story lines and characters that many people can still recognize. In fact, Guardians of the Galaxy might have been as fringe as they’ve gone for the moment, as anyone else that has come along has been widely known and easily recognized.

In essence, the Eternals are like a race of super beings that could possibly rival Superman and Supergirl since they are the creations of the godlike beings known as the Celestials, who are some of the most powerful, top-tier beings in the Marvel universe and are responsible for a good part of creation itself.Â  While the Eternals do have limits there aren’t many since they have a perfect command of their own physiology and are incredibly hard to kill since they rely on the same cosmic energy that has been seen to power other beings in the Marvel universe. In many ways it seems as if they are able to do pretty much anything they want and aren’t bound by much other than their sense of what’s right and what’s wrong. To think that a race of super-beings exists in the MCU, where it’s already been seen that enough powerful individuals reside to make one think that many earth-bound heroes and villains are weaklings despite their proven strength, is enough to make it seem as though this next phase in the MCU is going to take things to a new and insanely massive level. One can’t help but think that since the MCU is bringing in heroes and villains that are basically indestructible that the villains are going to have to be so over the top as to be unbeatable.

This was kind of the feeling in Infinity War and Endgame since if you’ll recall it took everything the heroes had to take on the children of Thanos. Ebony Maw and Cull Obsidian were extremely tough when they were on even ground, though Corvus Glaive and Proxima Midnight seemed to be bested rather easily by comparison. Still, as powerful as Thanos was, it would seem that one of the Eternals would be enough to kick his prune-faced behind back to Titan with ease. There is a bit of a danger in incorporating the Eternals and the Deviants, their opposing faction, into the MCU, and that’s the fact that they ARE so powerful in the first place. This is something that hasn’t quite worked out for the DCEU if anyone remembers since making a hero or a villain untouchable and incapable of being fully defeated raises a lot of questions, most of which seem to revolve around how long the idea will remain popular if neither the heroes or the villains can be taken down for a prolonged period of time. The Eternals can be harmed, but nothing is ever lasting since they too can heal quickly and are far more powerful than the average superhero.

Mike Cecchini and Richard Jordan from Den of Geek! have chimed in by stating that while there’s not a lot known about phase 4 when it comes to the MCU, the Eternals movie will be focusing heavily on the characters of Ikaris and Sersi, two individuals who will be attempting to defend the earth from their evil opposites, the Deviants. It would seem earth is bound to be a big staging point still in the next phase of the MCU, but that’s hardly surprising since quite honestly most stories seem to bring it home when the stuff hits the fans. Adding to the story however is the fact that the Eternals were made on earth by the Celestials, and were then left there. Of course the advanced race would eventually travel into space for various reasons and still maintain their relationship with their home planet, but as the millennia passed things did get kind of complicated with the Eternals. As far as the movie goes however it does seem as though it will focus primarily on Ikaris and Sersi and their struggle against the Deviants. Apart from that, it’s anyone’s guess at this point.