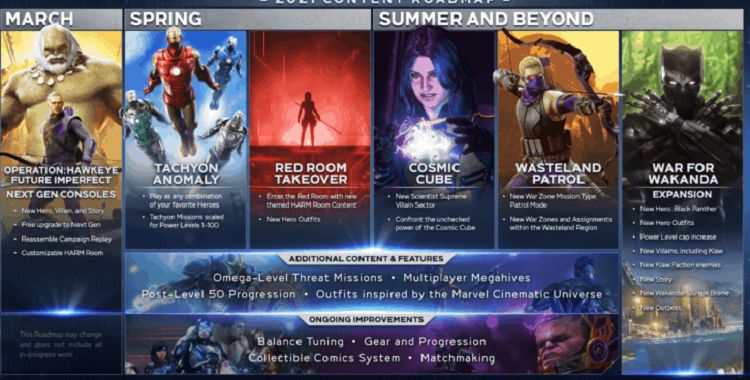 Marvel’s Avengers is getting a brand new update called the “Red Room Takeover” beginning on May 20 and will introduce plenty of new features, skins, and even something called the “Champion System” which sounds interesting to say the least. According to Square Enix, “The next part of our roadmap is upon us! Following the Rooskaya Protocols that ran from May 6 to May 20, the Red Room Takeover will initiate on May 20 and will last until May 31. Agent James ‘Jimmy’ Woo has reported a number of anomalies within the HARM Room, each linked to an unknown computer virus. His diagnostic tests have indicated that the hack originated from the same IP address as the Rooskaya Protocols. Along with the virus, encrypted messages have been sent, all addressed to Black Widow from ‘Rooskaya’ herself – Yelena Belova.” So, what do we know about Marvel’s Avengers’ Red Room Takeover event?

Square Enix released a preview of what’s to come with the Avengers’ Red Room Takeover event, which provides some details about the event as a whole, so let’s check it out:

A Champion System, you say? What does this entail? “Currently, when Heroes reach the level cap of 50, XP becomes obsolete. With the new Champion System, Heroes who are level 50 can improve their combat abilities even further. Once a Hero reaches level 50, earned XP from that point on is changed to Champion XP, which is specific to each Hero. Earning enough Champion XP will increase your Champion Level, which is marked on your nameplate. Whenever a Hero levels up their Champion Level, they’ll earn a Champion Skill Point, which is used to unlock a multitude of Champion Skills. Champion Skills are on their own separate interface and take the form of boosts to your damage, Perk chance activation, Heroic charge rate, etc. These are permanent increases, so every Champion Skill matters!” Unfortunately, Square Enix says that players will not be able to re-spec your Champion Skills yet, so you might want to think extra carefully about how you want to power up your Hero, at least for the time being. We’re also getting something called “Hero Catalysts” which seem to go hand in hand with the new Champion System that will be implemented alongside the Avengers’ Red Room Takeover event. Hero’s Catalysts “increase the amount of XP you earn. These will occasionally be available for free to retrieve from the Marketplace, and we’re looking at other ways for you to earn them as well. Hero’s Catalysts are a great way to catch up to friends or to level up any Heroes that haven’t reached level 50 yet.”

As part of the Rooskaya Protocol activity that leads you into the event, you’ll be tasked with defeating hordes of Synthoid enemies to collect Protocol Chips, which unlock special event-specific animated nameplates for each of the game’s Heroes. With this event, we also have some new character skins called the “Red Room Outfits” that are available in the game’s Marketplace, as well as a Black Widow outfit inspired from Avengers: Endgame, that was available when the event (technically) began on May 6. The rest of these new features will be making their way into Marvel’s Avengers on May 20, so make sure that all of your Heroes are ready to go by then, or you might be in trouble!