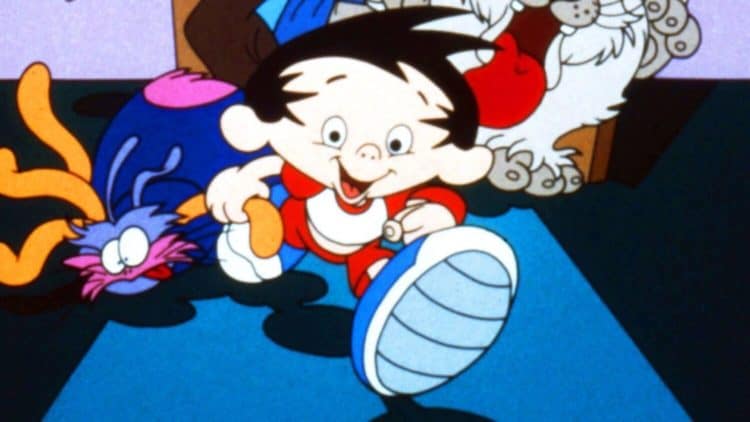 To be fair, a person really had to be a fan of Bobby’s World to get into it that much since it was a cute and funny show, and it was perfect for the time it was on TV. For nearly a decade this show was something that kids loved and parents tended to find wasn’t as problematic or as goofy as other cartoons since some of those that were shown in the 90s got downright nuts. But in a way, it does feel as though Howie Mandel used this as a platform to promote himself in a big way since he played the voice of Bobby, his own character, and he showed up as a live-action character as well. Some might want to call it grandstanding and some might want to think that he had a bit of an ego on him, well that part hasn’t changed that much, but the point is that Bobby’s World ended up being one of the more popular shows of the decade for a variety of reasons. The comparison between the Seinfeld show and Bobby’s World though is solid enough but it’s still enough to think that without a comparison such as this, the show might have been thought to be just a cartoon and nothing else.

One of the best things about the show however was that a lot of what went on happened in real life. These were actual stories that had been written into the series that had happened to Howie Mandel and his family, so there was definitely a more personal touch to them that made everything a little more fun and a lot easier for some kids to relate to since it catered to younger fans in a big way. On top of that, the show went through a host of subjects and even kept things moving along and included a lot of imaginary moments that made it possible to enjoy the time spent with Bobby even more since his adventures and his eventual understanding and comprehension of the world around him started to take shape and it was evident that the story wasn’t just glossing over certain parts of life but was actually incorporating them into the show. Some might have said that certain subjects didn’t need to be broached in a kids’ cartoon, but at the same time, it’s easy to think that if we don’t start teaching kids at some point, in the home at least, then there’s a good chance that later on these lessons are going to be much harder and won’t be received as well. Bobby’s World wasn’t the only program to bring up subjects such as this, but it was one of those that did it in a very fun and gentle manner that didn’t force the issue and didn’t attempt to block it from the viewers either.

A lot of what people are going to remember about Bobby’s World is that it was a fun and engaging cartoon and that it was something they could watch on Saturday’s or whenever the program was shown. Barring big fans of the show it’s fair to say that a lot of people might have forgotten that Howie Mandel was even associated with this show or any of the pertinent facts about the other characters and how they fit into the overall program. Bobby was for the most part the biggest character in the show, of course, and took up the majority of the story as was expected, but somehow the other characters did manage to gain quite a bit of prominence, especially Bobby’s father who Mandel also voiced. The parallels that the show shared with Seinfeld were pretty interesting, but after a while, Bobby’s World did take on its own look and feel and things finally took off in a direction that was difficult if not impossible to compare to Seinfeld most times and finally became its own thing. Of course, it does feel safe to mention that a lot of people might never have looked at Seinfeld and Bobby’s World and thought that they were anything alike, but looking back on it now it’s pretty simple since hindsight is, as it’s been said, perfect.

The things that we didn’t know about Bobby’s World are typically those that we didn’t care about as much when we were younger since we wanted to watch a cartoon and not have to worry about the details. Just for reference, a lot of kids didn’t worry about why Wile E. Coyote was chasing the Roadrunner, we just accepted that he was and that things were going to happen to him as a result. The same held true with a lot of cartoons, things were going to happen and there were bound to be consequences, good or bad, that would come as the result. Thinking about it too much kind of killed the fun sometimes.