Home
Shameless
The Evolution of Carl on Shameless 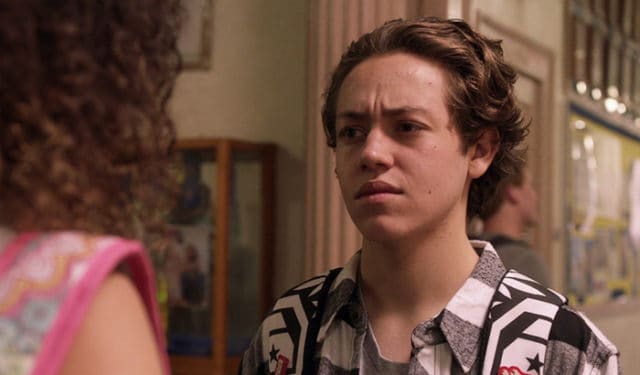 Carl Gallagher is the fifth child of Frank and Monica Gallagher on the Netflix series “Shameless”. The show revolves around the lives of the dysfunctional Gallagher family. The mother leaves the family and the father is not at all responsible. Frank Gallagher is more interested in drinking and creating schemes to get money than taking care of the family, often leaving the children to fend for themselves. “Shameless” is not just the story of a dysfunctional family but a family with a heart.

Despite the circumstances and drama that ensues, the Gallagher family is loyal to each other. Carl Gallagher is the perfect example of this. He’s a smart kid who has a lot of potential but no chance given the way his family lives. Carl makes an amazing transition throughout the series. He goes from a minor role as a young child to a major character on “Shameless”. Although Carl begins the series as a delinquent, he evolves into a pretty dark character but overcomes this and gets it together.

Here is the amazing evolution of Carl on “Shameless”.

Carl is basically a background character in Season 1 of “Shameless”. He has trouble at school and almost gets expelled but that isn’t much in the Gallagher family. He is seen killing small animals which is disturbing.

In Season 2, we begin to see how Carl has no hope of a normal life. When his grandmother comes to visit, she and Carl grow close. Then, grandma Peg takes him to the drug store so he can get different prescription medications from customer for his “sick” grandma. Grandma Peg helps Carl set up a meth lab in the Gallagher basement which ends up exploding.

In Season 3, Carl is taken advantage of by his dad for one of his schemes. When Carl has his head shaved due to lice, Frank convinces him he has cancer in an attempt to extort the Make a Wish Foundation. Frank is disappointed when the Foundation just sends Carl to “Cancer Camp” which Carl hates. Carl causes trouble at the camp and gets a female counselor fired when he asks her to show him her breasts because he’s dying.

When Carl, who has always had a fixation with death, gets in a fight with his cousin Patrick, Carl tries to kill Patrick with rat poison. Carl also becomes fixated with homosexuality which he doesn’t understand. When he and his brother Liam are temporarily placed in foster care before their sister Fiona can gain full guardianship, the boys are placed with a homosexual couple which fascinates Carl. When he returns home, Carl’s delinquency continues to increase. As we know deep down Carl is simply damaged by his family life. In an attempt to get close with his dad, Carl robs the foster parents’ home and gets caught. Frank takes the wrap.

Carl doesn’t have a huge storyline in Season 4 other than a relationship with Bonnie who lives with her family in a van. Carl helps her family by stealing to get them some money. Carl begins to fall for Bonnie just before she and her family leave.

Maybe because of his disappointment with losing Bonnie or maybe because of the seed his grandma planted in Season 2, Carl begins to deal drugs to make money. Sadly, Frank supports him and advises Carl to use his cousin Chucky to help transport drugs to Michigan. Chucky is an unknowing participant but gets caught. Carl is ratted out, and when he’s sentenced to Juvenile Prison or a probation period with good behavior, Carl shows just how angry he is. Instead of groveling to the judge as coached by Fiona, Carl insults the judge and is sentenced to a year in Juvie.

Carl, deep inside is a good and intelligent kid. He gets out of Juvie a few months early for good behavior. Unfortunately, Carl hooks up with fellow juvenile delinquent Nick and continues selling drugs and other bad behavior. We see a major turning point in just how far Carl will go when Nick kills the kid who stole his bike. Despite getting pistol whipped by a gang member, Carl is determined to get out of the drug trade.

In Season 7 we see a major transition for Carl. He falls in love with Dominique but she tries to pin an STD on him which isn’t true. Carl gets proof that Dominique was seeing another boy and shows the picture to her father. Carl becomes close to Dominique’s dad, maybe because he has always tried to seek his own father’s acceptance, and Dominique’s dad encourages Carl to pursue a military career.