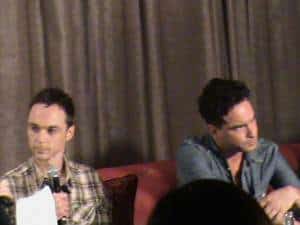 You want to know the two most awesome things about the EW/CBS party Thursday night at Comic Con 2010? OPEN. BAR. Also awesome? Meeting several members of the EW writing staff, including Michael Ausiello and Jeff Jensen. We also had a nice long chat with Dalton Ross from EW, who covers Survivor. Michael (a fellow TVOM blogger who’s attending Comic Con with me this year) was geeking out and chatting the new season of Survivor with Dalton.

The EW/CBS party was open to a little over 200 members of the public, all of whom emailed Ausiello and Jensen in an open lottery system last week for an opportunity to attend the event. Hosted at Bar 207 at the Hard Rock Hotel, it was an opportunity to see a showcase of CBS stars from new and returning shows for Fall 2010, including The Big Bang Theory, NCIS, Hawaii 5-0 and The Defenders. In fact, nearly the entire main cast of The Big Bang Theory was present, including Johnny Galecki, Jim Parsons, Kaley Cuoco, and Simon Helberg.

Also present were Daniel Dae Kim and Grace Park from the new CBS series, Hawaii 5-0 (which is the press room I’ll be attending tomorrow), as well as Jerry O’Connell, who will be starring in the new series, The Defenders, with Jim Belushi in the Fall. EW editor Jess Cagle took turns interviewing the various stars, asking them questions about their shows. It was great to see Daniel Dae Kim in the flesh after watching him for so long on LOST. Jerry O’Connell was really funny, chatting more about The Big Bang Theory than his own show.

I shot videos of Cagle talking with the stars, which we have for you below. Apologies in advance for the somewhat shaky video. I had my arm high up in the air, trying to look over the crowd, and propped up on the shoulder of a new friend we made at the party. Also, the crowd was pretty loud while the Q&A was being done, but the sound isn’t terrible.