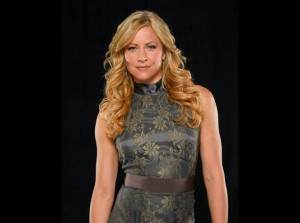 Brittany Daniel as Kelly Pitts in "The Game." Courtesy BET.

There are a lot of things I like about Brittany Daniel. We share a name, she grew up in Gainesville, Florida (home of my University of Florida Gators), and she’s the sister-in-law of one of my favorite TV actors, Cole Hauser. In short, she’s awesome, which made me a little embarrassed that I didn’t discover her until recently, in her role as Kelly, the slightly dense yet devoted wife (or is it soon-to-be ex-wife?) of star football player Jason Pitts on the sitcom The Game. As The Game revs up to come back for a fourth season, Brittany was sweet enough to talk to me about what might be next for Kelly, as well as her new Universal film Skyline.

Let’s talk about season four of The Game. Are you coming back? Fans are really hoping that Jason (Coby Bell) and Kelly get back together.

I’m coming back as a recurring [character], but that recurring could be every episode. I don’t think [they’ll get back together] this season, but I think most of the season we’ll be dealing with the fact that they’re not together. I hope they do. I hate it because I love working with [Coby]. I hope we’re in a lot of episodes. I think we’ll both be available to do as many episodes as they want. I think they were nervous because he was still attached to [Burn Notice] at first, they weren’t sure what to do with him and then what do they do with Kelly, but it was just a contractual thing.

It’s so surreal. To be cancelled for over a year and come back. All along I had a feeling that we would come back. I hear [it’s] the first of the year. I think we start shooting in November and air in January.

They’re probably the most popular characters on the show. It surprises me given that we’ve seen both of them can be pretty cruel to each other, but yet, they obviously love each other just as deeply. Why do you think people embrace them so much?

I think that they are actually really perfect for each other. Most couples can relate to the differences that we’re going through. People come up to me and tell me how much they relate to my character. I hope to see a more rebellious side of Kelly. You know, when you’re going through a divorce, you kind of revert to your twenties…I’ve talked to the producers about it.

It also has to help that you’ve had a great partner to work with in Coby Bell. Over three years, you two must be working pretty well together.

I love everyone. We have such a great cast. Working with Coby is so awesome because he’s just so down-to-earth and funny and talented and a great husband and dad to his kids.

How difficult was it to film their marriage falling apart? That final scene in the season-three finale, when Jason leaves the courtroom without her, was heartbreaking to watch. I cried right along with you.

It was really emotional for me. I take things really seriously when I’m working, and it upset me. Because Coby and I are so close, it really hurt. It was very emotional. I was imagining it happening to me. I really did not like Stacey Dash at that moment. I wanted to run across and punch her in the face.

And the same actress (Lonette McKee) who played his mom on The Game also played his character’s mother on Third Watch. Was that intentional?

For a comedy, The Game really dug into some serious issues in the last season. How was it working on a show that’s supposed to be funny but also dealing with things like divorce and infidelity?

What’s nice about the show is it’s not really slapstick-y. It’s an interesting take on a comedy. There’s some drama in it. It’s got a lot of good drama, and as an actor, that’s so much fun. As an actor, I wanted to do something where I could be funny but also exercise my dramatic skills, and this role is great for that. It’s really fun. It’s challenging. Most people think comedy is easier than doing the drama, but comedy is harder. I love how wonderfully drawn all the characters are on our show. I’ve really grown from my character.

A lot of people may not know you weren’t the first Kelly (Jennifer Baxter played the role in the backdoor pilot). How did you come into the role?

When they decided they wanted to recast her, I went in and read for them and they offered me the part. You know some roles you just read them and you’re like ‘This is my part’? I really felt the character and I really related to her. I loved her comedic sensibilities. I felt she was so funny in how she takes things so seriously. I related to her struggle.

I fit right on in. They were really, really accepting of me. You know, coming in late in the game you don’t know how people will react. We really are like a family. We’re so excited that we get to work together again.

Now you’re doing this new film Skyline, where Kelly Pitts gets to save the world.

It’s an alien invasion movie. Aliens coming to take over the world. We’re all trying to avoid getting killed by these aliens. I play a girl who’s a little full of herself, you see her get a comeuppance at the end. It’s really cool, though. The special effects are unbelievable. The producer-directors of this movie, we shot it in their condo and shot it for really nothing. I’m actually doing reshoots on Monday. We just finished it in March and it’s opening in November. The turnaround is really fast. I was at Comic-Con and I stepped out of the car and saw this giant billboard on the side of a hotel that said November. That’s how I found out when the movie was coming out!

It must have been different from The Game.

We cried and screamed for the entire movie, whereas on The Game I’m laughing and joking. I really think one day it’d be fun to do an action movie.

So what else do you watch?

You know what I just got into, is Lie To Me. It is so fascinating. I love It’s Always Sunny In Philadelphia. That’s the funniest show ever. I played a transsexual in that.

Your brother-in-law has a new series on NBC called Chase. Any chance we could see you appear on it?

I have no idea. That’d be awesome.

That’d be great. Do a dream sequence is something. When we were shooting Skyline, I was really sick one day and they had to shoot something. I came in for a few hours to shoot my close-ups and they hired my sister to stand around in the background for the wide shots. I was like, ‘Wow, the benefits of having a twin!’

The Game returns for its fourth season on BET in January 2011. Skyline releases on November 12, 2010. My thanks to Brittany Daniel for an amazing interview!