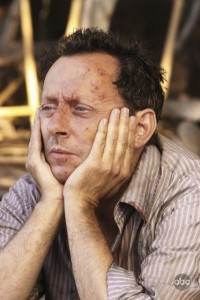 Although he was late to the action – by a season or so – Michael Emerson’s ‘Ben Linus’ has managed to be at the center, or at least the near-center, of everything pivotal that has occurred on LOST. In tonight’s episode, “The Incident,” Ben finds himself part of a procession to murder LOST‘s mysterious Oz, Jacob. TVovermind had a sit down with Michael Emerson to discuss Ben’s journey on LOST and where he thinks things will go from season 5.

The only constant with Ben is his deceit-shrouded inner purpose. Ben has surprised LOST fans both with the extremes of his rage and manipulation, as well as his flashes of humanity, guilt, and now apparent penance. Each season of LOST seems to graduate Ben into a new facet of his character, first as the mysterious intruder of season 2, then as the enigmatic leader of the others in season 3. A fugitive willing to sacrifice anything to hold onto his freedom in season 4, and a master manipulator crafting a return to the island through much of season 5. So will the finale present us with yet another iteration of Ben Linus?

“I think Ben’s character is pretty well established. I don’t know what it would take for him to become something other than himself. Although I have to say that the [LOST] finale – if it has the conclusion I think it has – is kind of earth shattering and may upset the landscape of the show so much that all bets are off for next season. I can’t even imagine what the show will be next year based on what I know about the finale.”

One major change that has taken place is Ben’s position in the hierarchy. After confronting the ‘monster,’ Ben’s was ordered by the angry apparition of his daughter, Alex, to obey John Locke. So is Ben truly Locke’s slave boy? “My sense is that it is all he can manage right now. Most of his tools are gone, and he’s sort of without resources right now. He’s also been shaken psychologically by recent events, by his confrontations with demons both real and imagined. I think he’s as low as we’ve ever seen him, but the wheels are still turning.”

We saw part of that sinister ever-plotting subtext in last week’s LOST, “Follow the Leader,” when Ben seemed to gravitate between Locke and his former right hand man – or, ‘advisor’ – Richard Alpert. “Yeah, he’s doing his old thing. He’s trying to play both ends against the middle. But, it feels a little feeble – doesn’t it? More like a habit, than an actual plan.” 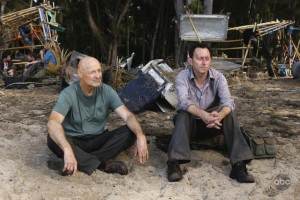 After “Follow the Leader,” though, it seemed that the word ‘leader’ has a different meaning amongst the island’s original inhabitants. We’ve already seen examples of the word being moot in terms of hierarchies, Alpert’s refusal to take orders from Widmore for example, and now the revelation of concerns over Locke’s take charge attitude despite the fact that he seemed, initially, to be the chosen-one. “It seems like a vague term, doesn’t it? It also seems like just one office along a pantheon of offices. Whoever is the leader really seems to be just the on-site lieutenant.”

When it comes to the big question on everybody’s minds, “Will Jack succeed in changing time in the finale?”, Emerson offers some very qualified theories. “I think the subject of time travel – rather than being explored or expanded upon – is put to rest, in the finale. That’s only because something so huge happens in the finale that I don’t know what its effects will be. As I said before it is big, so big that I don’t know how the show goes on after. You’ll be left hanging as you always are, maybe more, but it will definitely be food for thought and the subject of much conversation over the next seven months.”