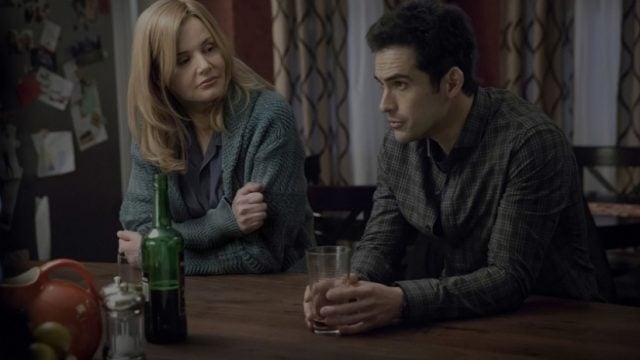 Last week’s episode of The Exorcist ended in a major way as we finally reunited with Casey while also learning about a much larger plot surrounding the events of the series. We’re definitely in the home-stretch of the season, so let’s take a look at what happened in the newest episode, “Chapter Seven: Father of Lies.”

The episode opens with a flash-forward in which we see Father Tomas’ congregation gathered for a service to pray for the return of Casey Rance. Nine days earlier, Tomas and Father Marcus are dealing with the aftermath of finding Casey, something Marcus chooses to keep secret from the family, knowing full well that the demon is holding four decades of revenge inside the girl. Tomas, obviously, isn’t a fan of the idea, but he acquiesces as he realizes it’s the best option. The tension between the two priests at the heart of the exorcism is working in the show’s favor, and it’s surprisingly fulfilling to see two completely different angles in the context of The Exorcist when the two men are both on the same side.

As before the scenes of the actual exorcism process continue to be one of the strongest aspects of The Exorcist (which is appropriate, given the title). Everything we see is just as raw and stomach-turning as that of the original film, and the behind-the-scenes crew deserves as much credit as possible for what they’ve been able to accomplish. While this series will probably be snubbed in plenty of departments come awards season (as is the norm for genre shows), makeup will surely get the respect that it deserves.

It may be the cliché thing to say, but, as a huge fan of the original film, I’ve loved learning more about Chris and Regan Macneill in the past two episodes. The cast is doing a really great job at channeling the emotion and “feel” of the initial portrayals of the characters, and it’s helping this series feel like a true extension of the film in a way that none of the sequels/prequels (even the criminally underrated The Exorcist III) never could.

Everything on The Exorcist is starting to reach a boiling point, and the episode closes with Regan/Angela finally back in the presence of the demon that possessed her as a child and that possesses Casey now. It feels like the exact step that had to be taken next, and I can’t wait to see how Jeremy Slater and the rest of the class and crew bring the story to a close in the season’s final three episodes. The Exorcist really is turning out to be something special for horror on television, and it’s going to be a shame if it doesn’t get the respect that it has earned.

What did you think of this week’s new episode of The Exorcist? What are your predictions for how the season will wrap up? Do you hope the show gets renewed for another year? Let us know your thoughts in the comments down below!

Regan Macneill is finally back with the demon that possessed her as a child, and the story is set to reach a boiling point sooner rather than later.