Home
TV News
Expedition: Back to the Future Trailer is Seeking Lost DeLoreans 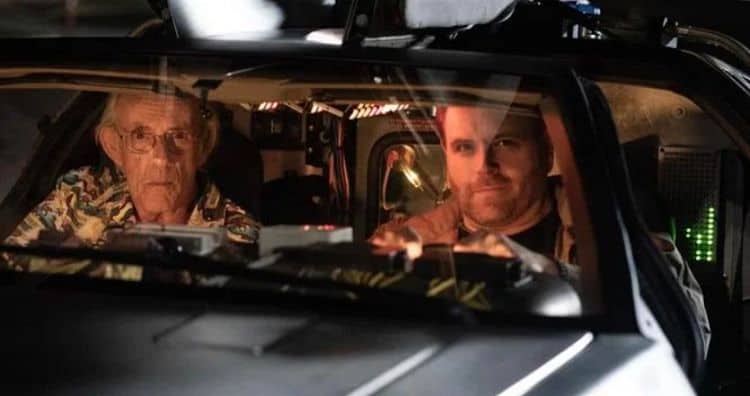 Well, if we can’t get another Back to the Future movie then apparently the Discovery Channel is thinking that people would love to see a show about tracking down the DeLoreans that were used, and sometimes abused in the iconic movies that so many people have enjoyed over the years. Popular host Josh Gates and Christopher Lloyd will be making their way around to discover what’s become of these historic cars while also exploring the lore and history of not only the car but the movie that helped to reinvigorate interest in the DeLorean at one point. There’s bound to be plenty of comedy and drama or at least a good attempt at both since the trip down memory lane is going to be one that a lot of people will want to take since Back to the Future is still one of the most popular trilogies ever created and despite the idea that the third movie is a little ‘meh’ compared to the other two, it’s still widely accepted since the pairing of Michael J. Fox and Christopher Lloyd, along with the rest of the cast, has been regarded for a long time as one of the best ever made. To be certain, it was only a matter of time until we managed to see a documentary that would delve into the movie somehow.

The fact that the Discovery Channel is focusing on the iconic car from the trilogy isn’t hard to figure out since the DeLorean is a rather unique vehicle that many people have expressed interest in over the years. What’s funny is that at one time it might have been an affordable car, but as of now there are still thousands that exist, but they were discontinued in the early 80s. There was more than one DeLorean used in the trilogy, and as anyone should be able to guess, they were heavily modified as even the engine had to be taken out to allow the car to go a bit faster since it topped out at 85 mph. A Porche engine was substituted to give the car a bit more speed, and the heavily-customized look of the car was obviously for the movie. But the DeLorean that was used in the movie, the primary one, is on display at this time, and it’s fair to say that others have fitted and remodeled to resemble the well-known design that was adapted for the movies.

Going back to this trilogy over and over is something that appears to be a trend at this time and to be fair, it’s not one of the worst that’s ever developed since the movies were a lot of fun. But as time moves on one can see that Christopher Lloyd and Michael J. Fox are starting to fade a bit. Fox’s battle with Parkinson’s is still ongoing and his efforts to help continue the research that will hopefully help others with his condition, while Lloyd is still relevant enough to see him pop up every now and then. But the truth is that the movies have become a pleasant memory over the years, and revisiting them has become a favored pastime of many people that happen to enjoy older movies and the ideas that don’t always make sense but still stand out as an inspiration for the ideas that are still to come. Let’s be honest, the idea of time travel isn’t really new, but the Back to the Future movies did introduce another perspective that has been embraced and debunked over the years but enjoyed at the same time. The story that the trilogy tells is one of the best parts after all since a lot of the time traveling and other aspects can be forgiven simply because it’s the type of story that a lot of people can get behind and fully enjoy without having to tear it apart at every interval. But the attempt to track down the cars that were used for the movies is bound to be an interesting journey since one can guess that Josh and Christopher will be going over several memories about the movie given that it’s only natural.

If we were to run down a list of the most famous movie cars out there it’s fair to say that the DeLorean would be one that a lot of people would recognize instantly. While today it might not stack up to a lot of other cars that people might enjoy, at least in some instances, the DeLorean was an impressive vehicle in its time and is still considered a classic since it helped to define an era in more than one way. The show airs on March 15th, which isn’t too far away for those that might want to stop by and take a look.