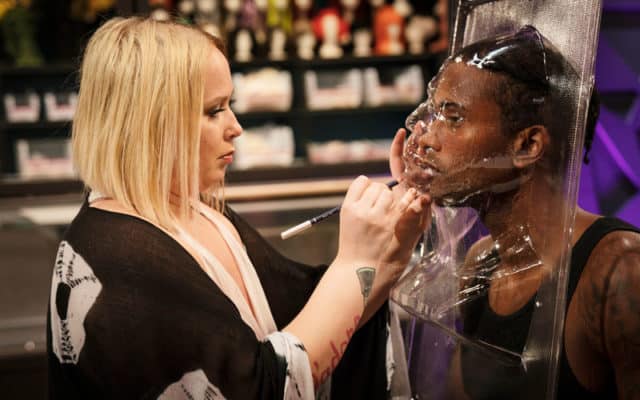 Anyone who enjoyed the ‘Face Off’ series on SyFy can now look forward to the spin-off from this show, ‘Face Off: Game Face’. The original ‘Face Off series was launched on January 26, 2011, and has just completed its twelfth series. It is a reality television game show where prosthetic makeup artists compete against each other in challenges that involve creating prostheses. It is hosted by actress McKenzie Westmore and a group of special effects makeup artists who form a panel of judges.

Due to the success of this reality series, the new spin-off program ‘Face Off: Game Face’ has been launched. The show has the same format as the original series with competitors competing in challenges to avoid elimination and win the grand prize. The difference with this series is that the competitors are all former ‘Face Off’ contestants described as ‘Face Off’ all-stars and the winner will become the ultimate champion.

There are three challenges every episode but these change each week. For example, in the first episode of the series, the contestants were challenged to create a fantasy character using just ears for inspiration. This challenge was followed by the postcard task where the contestants were given a postcard of a creepy location and their task was to create a scary character they may find there. After the first two tasks, one person is eliminated by the judges. The final challenge in episode one was to create their own character that could be part of the Borg Empire in Star Trek. After the final challenge, one person is eliminated and the other is announced as this week’s winner.

McKenzie Westmore returns to host this new spin-off series. Her experience as a member of the famous Westmore family of makeup artists along with her experience as an actress makes her the ideal person to host this show. She understands the techniques and processes the contestants are using and can interact well with those competing while they work. In addition to her role on this show, McKenzie Westmore has just launched her own range of cosmetics called Westmore Beauty.

The panel of judges changes each week and is made up of people who are experienced in special effects and makeup. However, there are two regular judges that viewers will come to know as the series continues. Rick Baker has 40 years’ experience of creating creatures and prosthetic makeup. The second regular judge is Ve Neil. She is one of the most experienced and famous makeup artists in the motion picture industry.

Who Will This Appeal To?

This reality TV series will interest anyone who loves reality shows, those interested in makeup or creative arts and people who are interested in learning more about the processes involved in creating prosthetics for the movies.

The show was launched on SyFy on August 22, 2017. The show will then appear weekly until the grand final when one talented and lucky contestant will walk away with the $10,000 prize.