Because what’s wrong with finding a little romance in the wake of an alien apocalypse?

TNT’s Falling Skies will land the second wave of its invasion when it debuts for Season 2 this summer, and we have an exclusive first look at a brand-new character and promotional still! This summer, actor Brandon Jay McLaren (The Killing, Being Erica) joins the cast of Falling Skies as Jamil Dexter, an ivy-leaguer who becomes the engineer and technology expert of the 2nd Massachusetts.

According to the initial casting report, Jamil was once a hard-working mechanic with an expensive engineering degree, who was days away from launching an IPO when the first Skitter attacks hit.

And judging from the photo, it looks like Jamil shares more than a friendly rapport with the 2nd Mass’s resident prayer-giver and medical assistant Lourdes (Seychelle Gabriel)! Might she be over that little crush on Hal (Drew Roy) she nursed throughout the first season?

McLaren was last seen as Rosie Larsen’s teacher Bennett Ahmed of The Killing, and is slated to appear in at least seven episodes of Falling Skies, beginning with the season premiere. Additionally, it was recently announced that LOST star Terry O’Quinn will also join the ten-episode second season of Falling Skies, appearing in the last two episodes as a former history professor and mentor to Tom Mason (Noah Wyle).

When last we left the resistance of Falling Skies in season one, the 2nd Mass had won an important victory against the Skitter forces, before the aliens appeared to Tom Mason with a desire to talk and threats of reclaiming his son Ben if he refused. With hands held, the Skitters then whisked the good historian away with them, leaving behind a stunned Captain Weaver (Will Patton)!

What will we see next when Falling Skies touches down to Earth in Summer 2012? Will Tom return from the Skitters with a cure for Ben (Connor Jessup), or wind up a changed man himself? Will we meet any new survivors apart from Brandon Jay McLaren’s Jamil Dexter? And what of the cunningly likeable John Pope (Colin Cunningham)?

Check out the exclusive Falling Skies season 2 pic below, and tune in this summer when the series returns on TNT! 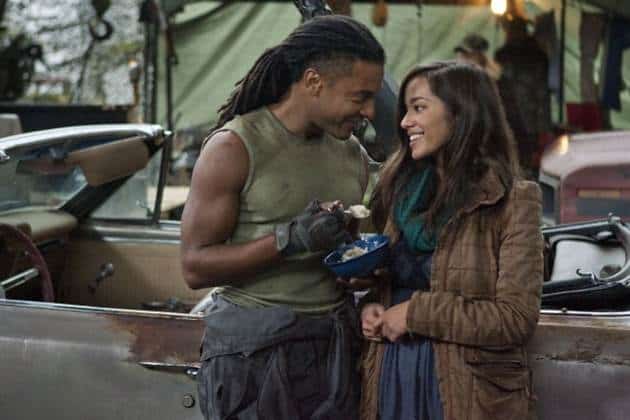