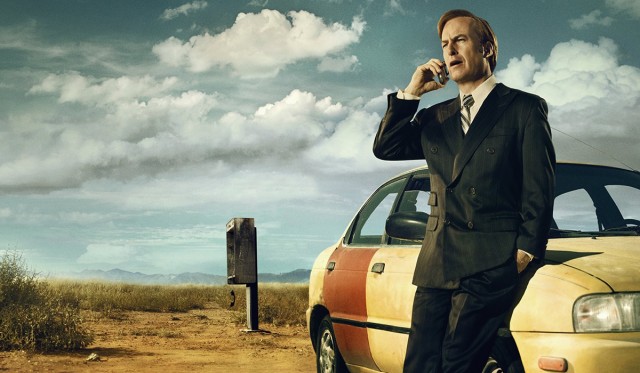 One of the things we love so much about Breaking Bad is not only the fact that it’s one of the best shows ever, but that it’s still being talked about today.Â  Fans are still coming up with deep, dark theories about the show and it’s literally endless.Â  As Better Call Saul gets set to air season 2’s premiere tonight, we can’t help but wonder if Vince Gilligan’s newest baby will create the same ripple effect.Â  Everyone is already wondering how long it’s going to take for Breaking Bad characters to enter the mix and it’s just a matter of time before something connects and audiences go wild.

As of right now there are two fan theories I happen to love that are connected to AMC’s Better Call Saul.Â  One of them is somewhat widely accepted.Â  The other one was written 8 months ago and I think it just may very well be onto something.


The clip breaks down the color schemes presented on the show, focusing mainly on what the characters are wearing. Characters that are up to no good are usually wearing warmers colors, like shades of red. Those that are a little more clean-cut will have blues present in their wardrobe. The Kettlemans are a perfect example, both Craig and Betsy are pointed out in the clip. They had a shift from good to bad and this is obvious with the colors they wear.


We all loved Walter White & Jesse Pinkman and many fans wonder how if & when they will be introduced in the show, well I believe I know the route the writers will take with the show. Some us also wonder what kind of conflicts will Jimmy McGill/Saul Goodman get into with the Cartel, my theory also touches on that:

(Warning: This may contain spoilers for Breaking Bad & Season one of Better Call Saul)

Nacho continues to do deals behind the cartel’s back & his boss Tuco. Tuco suspects something may be up, but due to a dispute with him killing a Mexican national he ends up going to prison. The Cartel sends Edwardo “Lalo” as his replacement, Nacho forces Jimmy McGill into working with him. Eventually the Cartel are getting close to figuring out Nacho is working against them, and Jimmy (Who is now Saul Goodman) can feel the heat coming from the cartel. So he’s minding his own business one day leaving his office when he’s ambushed and kidnapped, and drove out to the desert, Saul fearing for his life begs for mercy & rats out Nacho to the masked men holding him at gun point, except we find out it’s actually… Walt & Jesse, then cue Black screen, it’s a cliffhanger ending.

Now this theory is not pulled out of thin air I have a lot of hard evidence to suggest it might be true.

Tuco was imprisoned in 2003 which is one year after BCS is set in, which is 2002. The actor who played Tuco has said he isn’t interested in being a regular on the show, but he is an important character being that he’s Nacho’s Boss, so the writers will need to find another way to take him out of the story.

In the episode Saul was first introduced in Breaking Bad, he was kidnapped by Walt & Jesse wearing ski masks, Saul freaking out told them “No no soy seimpre amigo of de Cartel, it was Ignacio who did it” to which Jesse replies “who” then Saul says “Wait Lalo didn’t send you, that’s a relief” I’m paraphrasing but that’s pretty much what he said, also Ignacio is the antagonist Nacho’s real name btw. Here’s a clip of that whole scene

So what do you guys think? Will it come true, or what?