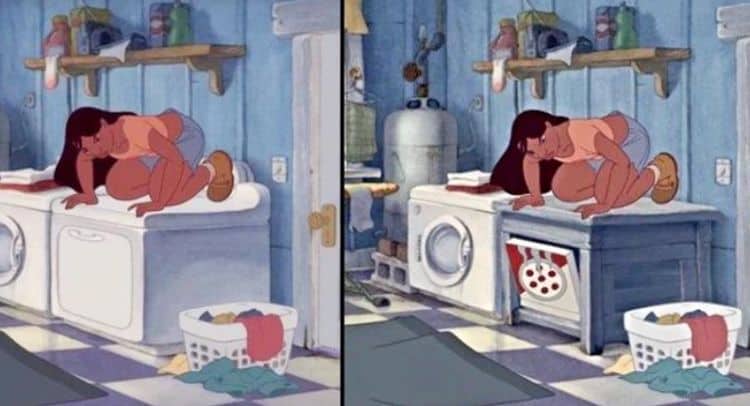 Is anyone else rolling their eyes and wondering just how much further Disney can keep bending backwards before they break their own apparently non-existent spine? As Kevin Burwick of MovieWeb alludes to, there have been plenty of ‘controversial’ items that Disney has changed throughout the years in regards to several of their properties, but this one found in Lilo & Stitch is almost laughable since not only does it make little to no sense in the course of the movie, but one question pops into my head just looking at it. Who in the world runs the dryer without looking in it first? Plus, a lot of kids might think about hiding in the dryer, but again, when thinking about it, how in the world would this be dangerous considering how easy it is to pop the door open and the fact that one usually LOOKS BEFORE STARTING A DRYER? The back and forth between the fans and Disney is, at this point, a certain kind of ridiculous that’s easy enough to walk away from with shrugged shoulders and a devil may care attitude, but just for the sake of wanting to dig into the ‘controversy’ and have a little fun, here goes.

Disney has no backbone, and they haven’t for a long time since anything that’s even hinted as as being controversial is either changed, taken out, or somehow edited to make sure that the mouthpieces that are raising hell are satisfied. Yet let’s see just what’s been kept. A huntsman still actively seeks out a young girl to take her heart for an evil queen….not edited. Villains fall to their deaths, one is even shown as having been hung in silhouette….not edited. It’s funny what Disney will gladly edit because it’s ‘dangerous’ or ‘disturbing’ when stood next to what it allows in its family-friendly movies. It’s also fun to watch the blank looks that come over the faces of those defending stuff like this when they realize that there are actually adult movies that don’t show the kind of violence that Disney movies have left alone for years on end while they focus on the more ‘problematic’ issues that crop up here and there. Seriously, if they were going to replace the dryer with something else, why not something that made sense? This has a lot of people wondering why they wouldn’t have a dryer right next to the washer, though of course there’s likely a way to explain this away.

One reason why Disney might still be willing to kowtow in such a manner is that they’re currently losing a good deal of money per day since it’s been reported that their theme parks are now being closed indefinitely, not just for a month or so until the pandemic is over and done with. Dirk Libbey of CinemaBlend has more on this matter. That means millions will be headed out the door as the Mouse House has to find a way to make ends meet as they continue to watch that river of green keep making its way out the door as they try to stem the flow. Likely as not the corporation has already found ways to do this, but they likely can’t afford to lose much more in the way of an audience over even the slightest of things. But this is kind of overkill in a way that makes a lot of us laugh since it’s further proof that Disney is going to fold like a piece of origami when they need to in order to satisfy those folks that don’t like this or that. When Song of the South won’t be played on Disney+ it’s pretty easy for a lot of people to guess why, especially since racism in such a manner is typically seen as less than appealing in a world that’s become increasingly over-sensitive and wants to forget a lot of what went into making the current era exist, whether it was good or bad. This does make a person wonder just what’s going to be next on the chopping block or what else is going to be changed though since it’s obvious the Mouse House is willing to serve up just about anything it can in order to appease whoever is demanding said changes.

But a single scene of a little girl jumping into a dryer to hide? Does Disney have any idea that they have movies on their roster that feature much riskier behavior? Pinocchio did more in a few minutes than anything Lilo did in the whole movie, while Peter Pan and his cultural faux pas still gets talked about to this day. There are more that Charlie Green of The Gamer can provide on line with these scenes. Why has none of that been changed? Oh Disney, they name is hypocrisy, and you definitely play it well. But so long as the Mouse House keeps making money, it’s hard to argue with their methods for too long.