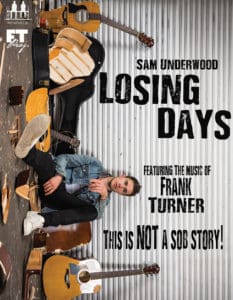 “We should probably talk”

Losing Days follows his hilarious and harrowing journey of losing his mind – and finding it again – set to the tunes that got him through. Featuring live music from Frank Turner’s ‘Tape Deck Heart’ album, and the debut performance of The Boxroom Larrys.

1 in 3 people experience some form of mental illness in the course of their life. For such a pervasive condition in society, opening up about the internal struggle many people deal with on a day to day basis is still surrounded by skepticism, shame and silence. Losing Days is a true story seen through a shattered kaleidoscope, delving into the superhero struggle of mental illness, and smashing the taboos that surround it.

This is NOT a sob story!

Tickets for July 28th – AtelierÂ Roquette can be purchased here.

Tickets for July 29th- The Sheen Center-Black Box Theater can be purchased here.Â

Losing Days is also part of the Edinburgh Fringe Festival 2017 at the New Town Theatre.