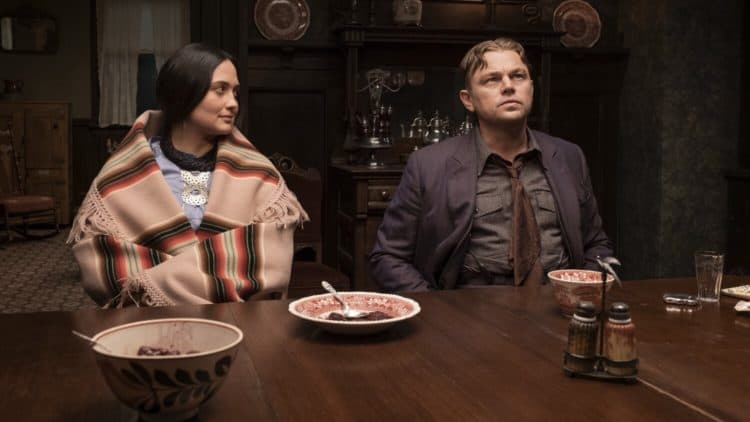 There’s a lot that can be said about Leonardo DiCaprio’s look for the upcoming Martin Scorsese movie titled Killers of the Flower Moon, but it’s likely that many people have already said quite a bit that might be discounted or disproved based on the impressions that can be taken from this single picture. The slightly haggard and even rumpled look that Leo has been given makes it appear as though he’s not entirely distraught and downtrodden, but is at the very least not having the best time in the world at that particular moment. It could be that this single picture isn’t indicative of what will be happening throughout the rest of the movie, but from the premise, it sounds as though his character, Ernest Burkhart, will have a lot to answer for considering that the Osage Indians, who are approached for the rights to drill for oil on their land, are going to start dying off under mysterious circumstances. One might think that this wouldn’t be the right time in history to show such a movie, but when it’s Martin Scorsese delivering the story it would appear that there’s really no way to say ‘no’ to the man since he’s such a legendary filmmaker. Those that might say it’s a double standard aren’t entirely wrong, but one has to admit that if anyone decides to pull that card and use it then they’re not really helping the situation, but instead would be resorting to the same tactics that they’ve accused cancel culture of in the recent past. In other words, those making the rules are the gatekeepers at this time since their opinions tend to decide what will be let through without comment or call to pull the movie. It’s a rather cynical way to look at things, but it’s also something that will be largely ignored simply because it is Scorsese and, as many people should be able to understand, the works of various filmmakers are often seen as provocative but also purposeful to those that have an agenda to push.

The hope would be that we might get to see a story that’s disturbing but that doesn’t need to send a message of any sort to the audience. That’s not always possible these days since people have found reasons to be offended by just about anything and everything, and anything that has to do with BIPOC individuals at this point is bound to be subject to criticisms of all sort. But from the first look, it does appear that Scorsese is going to be doing the same thing he does all the time, which is to make a compelling and worthwhile movie. The statements that this will be unlike any other movie in the history of cinema is something that’s easy to smile at since such things are said about many movies, and while it’s very true that some movies are groundbreaking and in some ways insanely impressive, the fact is that Scorsese’s movies are entertaining but not exactly worth the sky-high praise that so many are willing to give them most times. If one is to think that Scorsese is that great of a storyteller, and he is, that’s all well and good. But these days the praise he receives has more to do with what he’s accomplished in the past and what people have come to expect rather than the actual mastery that people claim he still has to this day. It sounds argumentative and much like something that many people would gladly ignore, right? Such words would be claimed to be troll-worthy, but the truth is that Scorsese is able to bank on his name more than his skill these days, since The Irishman was a decent story, but has been debunked by many people and, on top of that, was far longer than it needed to be to tell a compelling story.

There’s no need or attempt here to denounce Scorsese, only a need to remind people to focus on what he’s currently done, not continue to proclaim him a genius in an effort to blanket any mistakes or foibles that have been made with his current and recent projects. The man is a great storyteller and filmmaker, but like so many others he’s definitely allowed people to paint him in a light that speaks of impeccable genius that has little if any real fault when in truth he’s a great storyteller with plenty of faults that people love to excuse even as they list them for all to see and understand. Killers of the Flower Moon is bound to be a haunting look at a true story through the lens that Scorsese often uses to tell his tales. What this means is that plenty of the story might be as close to factual as possible, while a significant portion of it will benefit from his storytelling abilities, which are considerable.