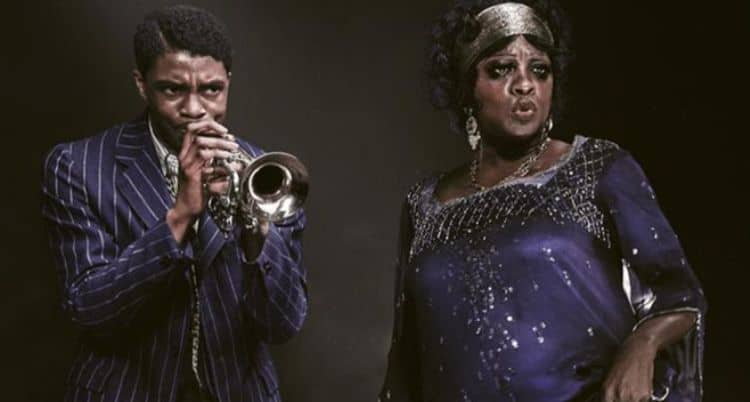 Upon watching the trailer to Ma Rainey’s Black Bottom some might take note of the racial tensions of the time and the idea that the power within the music is what some folks were trying to cash in on. That would be pretty accurate actually since at that time music producers were doing their best to bring new sounds to the public and were finding that the Blues had become hot in a big way with a lot of people since the stories behind the music were in some ways a bit controversial and in others highly addictive to those that wanted to listen. And yes, there was a great deal of tension since back in the days of Ma Rainey there was still a huge divide between people of color and whites, no matter how much the music touched people, and it can be felt within the notes of the trailer since the actors taking part in this movie are just that good. But as this is the late Chadwick Boseman’s last appearance before his untimely passing, one can only imagine that it’s going to be an extremely powerful performance that will give rise to the feelings that were present in this time period and the struggle that no doubt took place regularly for POC to keep control of their music as it was hitting a high note in society.

One has to remember that certain types of music were still seen as less than desirable, along with various lifestyles back in these days and as a result, some aspects of life that we see as normal and commonplace today, no matter any opposing sentiments, were nearly criminalized or were seen as punishable offenses at one time. But there was serious power in a lot of the music of this time, and despite the idea that people were attempting to cash in on the idea it was fairly easy to hear the force and the passion that came with the music, but behind the scenes, it was just as likely that there were triumphs, but also difficulties that had to be dealt with as some performers were on their way up and felt the need to fight for their spot, while others were already well-established and were more than willing to do what it took to remind the newcomers why they were so popular and why they were on top. The music industry has a fairly long history of being brutal to those that attempt to clutch at fame, and the one constant that most people that have sought to make their way into the history books have discovered is that the industry is all about itself. Any talk about pushing the name of this or that star is fleeting and very few ever become the type of legend they sought to be early on in their career. This was true back in Ma Rainey’s time as well, and despite the desire to etch her name in the history books, one thing that she and many others had to find out the hard way is that color and status doesn’t mean much in the industry unless it’s green and it’s coming in on a constant basis.

The stars of today, yesterday, and the days to come are window dressing to an industry that will gladly seek the next talent if those lucky few that become famous aren’t ready to toe the line and do as they need to in order to retain their status, and it feels accurate to say that as much power and influence as some of them have, or think they do, quite a few musicians could be replaced by the thousands of talented individuals that are waiting in the wings to be noticed. That’s the trick of the music industry after all, if the stars aren’t willing or capable of amusing the fans, then they tend to fade quickly and are easily replaced, no matter how much anyone believes this isn’t true. The next big thing can become old news in a matter of days, or less if they’re not willing to play ball. Like any industry that caters to fans, the music industry has for a long time been one of those that is great for those that love the music and are willing to go through hell and even more to get what they want, or are exceptionally lucky and know the right people. But there are literally thousands of people that would love to start a music career and rise to fame and have to come face to face with the harsh reality that it’s not going to happen.

As a final performance, this is likely going to be one of the movies that people will remember Chadwick Boseman for, but it’s likely that it will be a footnote in his career since Black Panther will probably be the movie that everyone chooses to remember, as well as 42.