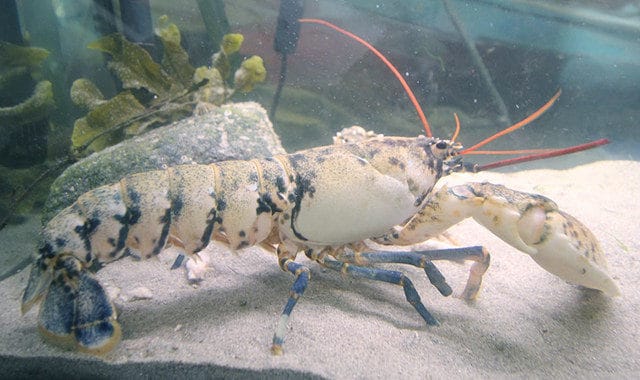 As most of you know I like to post videos and pictures of sharks.Â  I haven’t gotten to other animals but in time I think there will be enough cool footage of animal fights and insane nature stuff that will find its way up here.Â  When it comes to animals like lobsters they’re not exactly exciting or eye catching.Â  However, when something as rare as this comes along, it’s pretty cool.

This is a shot of the albino lobster caught by Irish fisherman Charlie O’Malley off the coast of Achill Island in western Ireland. It currently resides at The Achill Experience, an aquarium and museum in the area. It’s estimated only one in 100-million lobsters are born albino. And, as staggering as those odds are, they’re still better than you chance of winning the Powerball lottery (1 in 292,201,338).

You know what sucks about this?Â  The fact that the only thing I’m thinking when I see this lobster is “what will this taste like?”Â  I mean what else am I supposed to think?Â  It’s rare you get to see “cool” lobster videos.Â  Although I’m a huge fan of when lobsters are in those tanks when you enter a seafood restaurant.Â  That should be a prerequisite when you open a seafood restaurant.