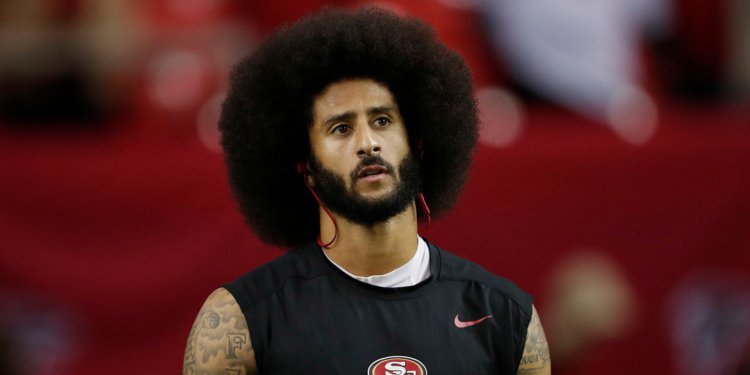 If you’re looking for an article to glorify Colin Kaepernick and state how ‘brave’ and how great he’s been throughout the course of his struggle with the NFL and his need to show everyone that he has principles that he’ll fight for, it might be time to move along. While I’ll save the worst vitriol that’s usually reserved for the former quarterback of the San Francisco 49ers, it’s easy enough to say that he’s been a thorn in the side of the NFL for the last few years since making his stance known. One can only assume that he’ll eventually have a movie made of his life to show that his accomplishments off the field have meant something other than the pursuit for more money since let’s face it, he opted out of his contract before he could be released and then managed to get a payday he hadn’t earned not only when Nike brought him into their camp, but when the NFL settled over his apparent ‘blacklisting’ when no team wanted to sign him. If a movie does happen you can bet that it will be one that will spark a lot of debate.

Here are five individuals the might be able to pull this off. I would say Adrien Brody, but he’s white and you can imagine the controversy that would create.

To start with casting for Kaepernick would be kind of tough since he does have kind of a distinctive look. It would take someone that looks close enough and could rock an afro and the same kind of facial hair at this point, or at least be able to play Colin as a younger man. Jaden has been seen on the big screen a few times, but it would seem as though it might take a real effort to get him back in front of an audience. Still, he might possess the right kind of attitude to make this part work if he could be convinced that it’s right for him. If not there are plenty others that could be utilized, but he’s at least worthy of being on the list.

His acting skills are spot-on and would be great enough to make this work. Considering that he’s played a wide variety of characters in his time on screen it’s safe to say that he’d be able to channel Kaep’s energy and possibly make it work in a big way. He’d have to act a bit arrogant and like a jerk at times but he’s done that before and wouldn’t find much difficulty. It’s not slamming Colin so much as it is noticing his attitude and behavior earlier in his career that makes this statement pretty accurate.

He’s another person that might be a few shades too dark but again, it wouldn’t matter as much since it would work all the same with the level of acting talent that he brings to the table. Like I said, Colin is a hard person to cast for since he’s got a very distinctive look that puts him well apart from so many other people. But Parker has shown that he can use his acting skills just as well as anyone and can become the person he’s been cast as in order to make it convincing. This role would be something that any person that was selected for it would be something that might test a lot of folks when it comes to their ability to act like Colin.

Ludacris might actually have to bulk up for this role if he actually took it since he’s not the smallest guy in the world but he doesn’t seem all that buff to be honest. Kaepernick is a very fit man without any doubt, and while Ludacris has been seen to be kind of physical in a couple of movies he’s still not that imposing of a figure when it comes to his physique. It might be that he’s a bit shorter than Kaep as well, as Ludacris stands at 5’8″ while Colin towers over him at 6’4″. So yeah, there might be a lot of different angles that would need to be used.

The downfall of this role obviously is that there are few men in show business that are as tall as Kaep that look like him, while some of the shorter men, shorter than Russell Wilson of the Seahawks no less, look like him but obviously don’t have the height. From an acting standpoint it’s a hope that this wouldn’t matter as much, but it would take some doing to make it convincing. The acting wouldn’t be a big problem however, as each person on this list, including Brandon, are well-versed in how to do their job.

Maybe some folks would see this movie as a dramatic comedy.