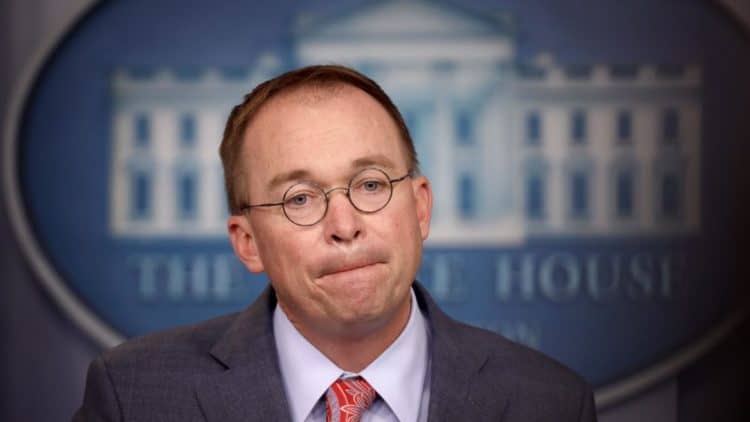 Mick Mulvaney is, to those who know, just one of many people that are currently involved in the attempted impeachment of President Trump. While both sides are crowing about their chances at victory and new evidence is being brought forth to cast doubt on either side, people like Mick are doing whatever they can to make certain that their side comes off looking the best. In a movie he might be seen as another toady that scrambles about saying what he needs to and taking care of things behind the scenes, which means that any actor taking his place in a movie might need to be able to be somewhat shifty and a bit skilled when it comes to scuttling about to perform damage control as it’s needed. If a movie is ever made of the impeachment it does seem as though an all-star cast is going to be compiled to make it work.

Here are five men that could possibly play Mick’s part.

The wildly popular comedian is someone that continually nettles at the Trump administration and is known to offer some very off-color commentary whenever he feels the need. He’s a funny guy without a doubt but even those that aren’t clinging forcefully to either political side might think that he goes a little far at times. That being the case though this role might actually seem difficult or easy for him depending on how he was allowed to play it and the mindset he approached the role with. It does feel as though John would put on a good performance and it would be interesting to see him in a role such as this since it would be kind of a switch.

There’s not a lot that Johnny Depp can’t do other than convince people that Amber Heard might have just as many issues as he does at times, but on the screen he’s one of the best actors out there and that’s been proven despite the fans’ outrage that he was kept in the Fantastic Beasts movies. It is kind of interesting to think that we hear more about Heard’s story than Depp’s even if the entire situation is entirely messed up and hardly worth more than a passing glance since the issues the two of them have are largely their own and should be resolved anywhere but the court of public opinion.

This might seem like an odd choice but quite honestly it does feel as though Penn could take this role and just go with it in a way, kind of like a challenge being laid down since we don’t often get to see him in roles like this lately. It might be that he wouldn’t be the first choice and that he might not even be able to gain the support of enough interested parties that it would happen. But it would still be an interest to see if he could pull it off and get into the part. In some ways it does feel as though ideologies might somehow get in the way of some roles for various people, though in truth it’s all about who wants to work and who doesn’t.

Harrelson is a very versatile actor that can do just about anything if he’s given enough time to work it out. Following movies like The Hunger Games and Zombieland however a role like this would seem kind of low-key in a way, almost as though he was downgrading just a bit to take on a role that wasn’t all that exciting but was still a paying gig. He’s been pretty popular in the last several years as his career has been pretty steady for some time and people have been reminded again and again why he’s one of those that can stick around not have to make a massive hit every time he’s on screen.

Ralph is another popular actor that can perform a wide number of roles since he’s both skilled and he has a fairly innocuous look that can be molded in a number of ways. His acting ability is great enough that he can take on anyone that’s close to his appearance, and this would be one of those that would qualify. Apart from that, his ability to become the character he’s playing is definitely up there with some of the best, and his professionalism when it comes to completing a role is impressive enough to state that he would probably knock this role out of the park without a lot of effort.

The best thing about anyone playing a role like this is that thanks to the dramatic lean of it they wouldn’t have to be 100 percent accurate, but would only have to play it up enough to appease the audience.