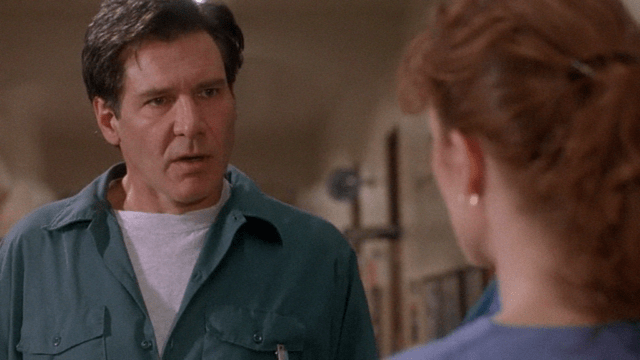 Emergency rooms are not the place you want to be, not even in movies. That doesn’t change the fact that these scenes can be kind of impressive or in some ways horrific. The most impressive scenes usually grab your attention through one visual or another and don’t let go until the scene concludes, if then. Most of all it’s Â the emotions of an emergency room that can really grab an audience. In movies the emergency room is just a dire of a situation as anywhere, but the unrealistic manner in which Hollywood decides to proceed grabs at the audience in a way that is all entertainment as it breaks from reality. Maybe that’s the scenes are so memorable.

Here are a few scenes of emergency rooms or hospital rooms that are as close as one can get without actually being in the ER.

If you didn’t feel your heart clench when you saw Hillary propped up in bed with tubes in her nose and her appearance making her seem close to death’s door then you need to seriously re-evaluate your level of compassion for your fellow human being. Granted it’s a movie, but imagine seeing someone you care about laid up in such a fashion. Your heart would be sinking faster than a stone if you had to deal with this type of situation. And yet for all that she smiles as she tells her friend that she waited for her.

So technically this isn’t an ER, but it’s as close as it gets without actually being on the operating table. Plus, it’s simply horrific to think that the man essentially responsible for your girlfriend’s death and your disfigurement is talking to you in a rational, clear-headed manner trying to justify his actions. Harvey might not be in his right mind at this moment but it’s safe to assume that he’d like nothing more than to put a third eye in the Joker’s head.

She actually shoots and then shoves the patient off of the operating table. That’s callous even for a psycophath, which Lucy is not. Instead she interested in performing a little surgery on herself as she goes about threatening the doctors so that they’ll remove the bag of drugs that was smuggled in her body. Unfortunately the drugs have already begun to metabolize in her system and it’s really hard to know just what will happen next.

Needless to say this isn’t a common occurrence in the ER. But when someone comes in with what looks like self-inflicted wounds in her wrists it begs the question of how their life is going as of now. Frankie doesn’t seem maladjusted or even depressed in any way, but medical staff need to ask these questions anyhow. If they didn’t it could open them up to a severe malpractice suit and eventually cost them their license to practice medicine. Even if she didn’t hurt herself, which she didn’t, a reasonable mind will doubt that it “just happened”.

Even when he’s on the lam Richard Kimball can’t help but do his job. When he sees a young boy in need he stops and makes a diagnosis that he can only hope is right. Getting the boy up to the operating room is important enough that he almost blows his cover by getting into it with the doctor that was in charge of the boy’s care. No good deed goes unpunished right?

Emergency rooms in movies are much simpler, more to the point, and easier to navigate. In real life they’re hardly ever that simple or that efficient.