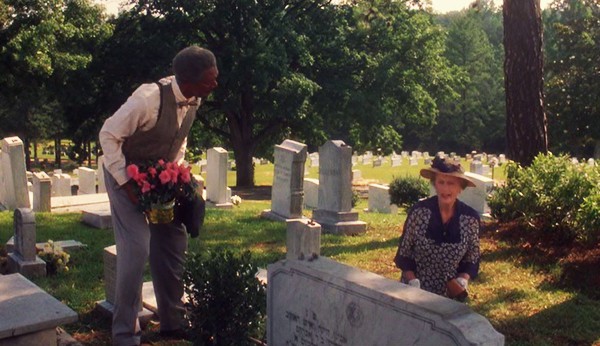 It is really hard in this day and age to think that there’s anyone that doesn’t know how to read, but it’s real. A lot of people are still highly illiterate and couldn’t read a stop sign. In the movies it’s made to be unbearably tragic since there too they can’t seem to understand how anyone could go through life without learning how to read. It’s all too easy for those that have been given the privilege of learning how to read, write, spell, and do other things with words that come so easily might think that anyone and everyone should be able to do it. But the thing about reading is that like anything else in this world it takes practice. The letters we use on an everyday basis might be nothing more than meaningless squiggles to those that were never given the opportunity to tell what they really say and mean.

The fact that Hoke is Daisy’s best friend no matter how badly she treats him is kind of a testament to his patience and his ability to see past the nastiness in people. But when it’s revealed that he can’t read it’s still enough for Daisy to be amazed since she can’t imagine it possible for a grown man to get by without this skill. Of course look at all a person has to do and be able to read, and what they have to do in order to get by throughout their day. Of course if one doesn’t really have to read the signs but just know what they mean without understanding the words then it’s easy enough to do one’s job, sometimes.

4. A League of Their Own

At one point a lot, and I mean a LOT, of women in this country were illiterate since their job was considered to be to stay home and be a good housewife and mother to their husband and children respectively. A lot of women still knew how to read but they didn’t make as much fuss about it as you would see now. This is kind of a sad case really since not being able to read makes life increasingly difficult, especially when you can’t read your own name. If not for the kindness of one of her teammates Shirley might have gone on home and never realized that she’d made one of the biggest steps of her life.

It’s not exactly impressive for a grown man that’s attending grade school all over again to make fun of a kid for not being able to read properly yet. In fact you might say that if such a thing were to ever happen the shaming that would be brought on to the adult would be well-deserved. Teaching kids to read isn’t always easy and it’s bound to be a trial that many upon many teachers find a bit tedious sometimes but at the very least it’s rewarding when the kids finally do start to learn and show some improvement. Reading is after all one of the best things to stimulate a mind and give people new ideas on how to live their lives.

Now there is a scene in this movie when the boys are sitting around reading the newspaper and Billy blows them all away by showing that he has the skill to read at a much higher level than most of them. But reading a lot and learning how to read can produce a very cultured mind as well as this scene shows with Charlie. “You and I” is definitely the proper way to speak and through reading a person can learn this quite easily since repetition and the continued appearance of such phrases can make it stick in the mind that this is how grammar works and how it’s supposed to sound. It’s not always said this way, but reading helps to reinforce it.

A supermodel that can’t read at all isn’t exactly a good endorsement for a school where reading is going to be the primary skill that’s focused on, but then in this world it seems that everything revolves around modeling so it’s kind of forgivable for the comedy of it. The only problem was that Zoolander was supposed to be insanely funny and it came off as more insane than anything. It’s surprising really since just about everyone in this film has the ability to be funny as can be but this movie somehow flopped in a way that seemed almost jaunty and, well, gay. As far as literacy goes it’s a good lesson on why you should stay in school and learn something, particularly how to read and write.

Being illiterate isn’t a crime but it is kind of a shame in a world where reading and writing are so important.