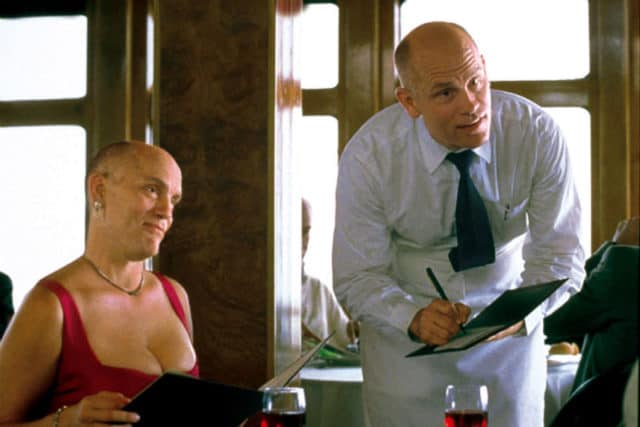 Scenes in movies in which actors play themselves are kind of interesting since you get to see them in a different manner but still don’t know if it’s just them acting completely or if there’s a little more to it. Obviously they’re acting out a part but it’s a little more than that since they’re not going by a different name and are basically showing just what they might be like off screen. In any case the effect is that they get to place themselves in the movie where other actors are playing a part and they’re, well, just playing who they are.

It’s a bit of an existential touch to any movie but it works in an odd, quirky way.

Being John Malkovich is kind of disturbing. To anyone else that enters the strange hole in the office wall that leads into Malkovich’s head it becomes a joyride that allows them to actively control the actor. But if Malkovich enters the hole everything comes up Malkovich, meaning everyone he sees will look like him, they’ll all repeat his name, and in a sense he becomes trapped inside his own head. That’s spooky.

This comes about when the crew accepts the challenge made by a master thief that wants to prove who’s better at their craft. The guys are tasked with stealing a famous Faberge Egg which is under tight security and is supposedly impossible to steal. They bring in Tess to play the part of Julia Roberts, when Julia Roberts IS Tess. And then they run into Bruce Willis, who is a good friend of Julia Roberts. Oh, and they stole the egg a while before this scene.

When Jay and Silent Bob make their way to Hollywood it’s kind of a mess really since neither one of them seems to have a fully functioning brain between them and they tend to do things very backward. Somehow they get placed as extras on the set of a new Good Will Hunting movie and happen to see Ben Affleck and Matt Damon discussing what it means to pay back a friend by doing one type of movie. They’re not the only celebrities playing themselves in this one. Jason Biggs and James Van Der Beek are in there as well.

Neil Patrick Harris is probably the best and the worst thing to happen to Harold and Kumar on their way to White Castle. First they pick him up while he’s hitchhiking, and from there it becomes a series of misadventures the likes of which no one would want to put up with in a single night. Eventually the guys do make it to White Castle, but on the verge of the movie’s ending the buildup for another movie is laid down without hesitation.

Chuck Norris has made kind of a reputation for rooting for the underdog in some of his movies. This one in particular sees him coming to the rescue of a young boy that’s in need of another teammate to compete in a local karate championship. Norris takes on an overly aggressive instructor that needs a crash course in humility.

Actors playing themselves in movies isn’t anything new but it’s fun to watch.