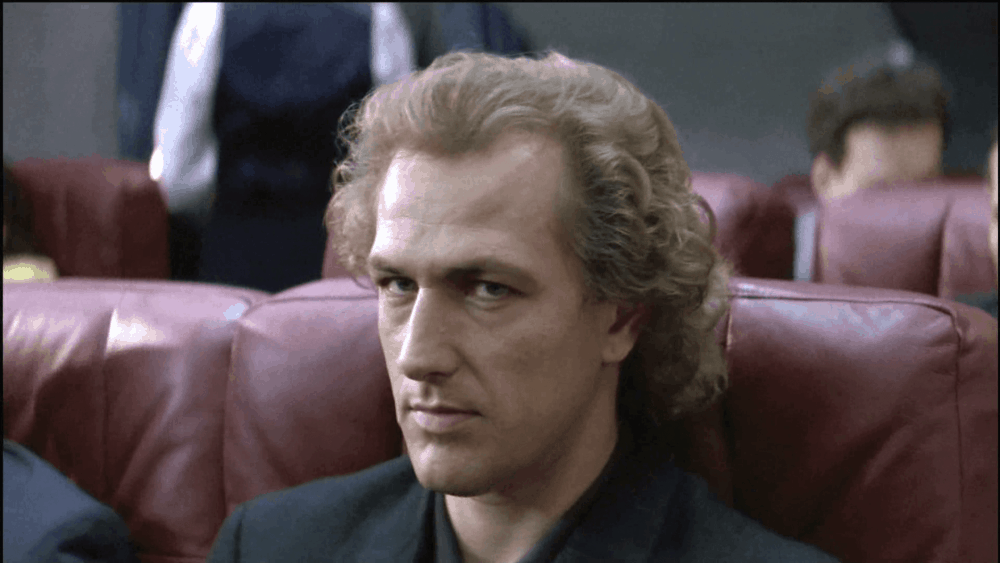 While the movie villains in the 80s set the bar pretty high those in the 90s met that challenge and kept pushing it higher. Seriously, the 90s villains might have gotten a little campy and out of control at times, but they were psychotic in a way that made you wonder how much of a toll it took on the actors that had to play them sometimes. They were the types that would go megaton at the drop of a hat and still keep enough in the tank to keep going for a prolonged period of time. Where other villains might wear out and finally just want to cut and run after proving their point the 90s villains wanted to stick around and play some more and would do that by taking out their anger and rage on anyone that happened to be in the vicinity. While kids and women have never really been out of bounds for many villains these guys took that violence to a new level by seeming to see those in front of them as walking targets and little else.

It was a hard choice, but here are a few of the best male villains from the 90s.

This guy has actually played more than one villain in his time and he’s been just as creepy with all of them since you get the feeling that he could smile at you while he was sticking a knife in your gut. Some bad guys just seem to have the insane manner that allows them to be nice guys on the outside but then flip the switch and be total psychos when they turn around, almost like a Mr. Hyde wearing a Jekyll mask that’s only skin-deep. He wasn’t much of a match for Wesley Snipes save for the fact that he was about as ruthless as it gets, but just the chilling looks he can give are enough to make the list.

Gary Oldman knows how to do bad, and he knows how to do it in the craziest way possible. He thinks nothing of going through an apartment with a loaded shotgun and blasting those that might be able to identify him and his team, even vaporizing a woman in the bathtub for crying out loud. But even scarier than his penchant for violence is that he’s a detective in this movie, an honest to goodness man of the law supposedly that somehow manages to get away with this stuff. You hope in real life that this couldn’t ever happen and wonder if such things are pure Hollywood and nothing else, but then you read the news and really start to have your doubts.

Cyrus is the unrepentant killer, the guy that will do pretty much anything and no longer sees the line between right and wrong any longer since he’s heaped so many bodies on top of it during his long history of mayhem. Nothing is taboo to him except maybe rape, which is odd since despite everything criminals still seem to have a code when it comes to doing wrong against women and children. However much redemption that might afford him however still doesn’t manage to put him back in the moral black, as his own deeds and actions have kept him in the red for so long that he’s probably forgotten what it’s like to be innocent, if he ever was.

You can’t really call Agent Smith a neutral bad guy, but he’s not exactly the chaotic presence that the others are. Despite that he’s terrifying since in the Matrix he is everyone, and he is no one. He’s able to be wherever he needs to be to take down those that are attempting to wake others up to the truth, and thanks to being a part of the Matrix he’s able to dish out some serious pain and eliminate anyone that threatens the system. In this movie however he’s only limited by one thing: he can’t leave the Matrix. Once he’s freed from his purpose he can do pretty much anything, but while he’s in the Matrix he’s a threat that can be circumvented.

Bodhi is the bad guy that you kind of don’t want to be the bad guy since his lifestyle is the type of that a lot of us can look up to and find the desire to emulate. He’s so carefree and laid back that thinking of him as a villain seems almost wrong. But that’s what makes him the perfect villain, he’s the guy you won’t want to suspect simply because he’s all about the rush, the feel of freedom, and the carefree life that unfortunately costs a great deal of money.

The 90s villains are definitely a step above, and still stand as some of the greatest villains in movie history.