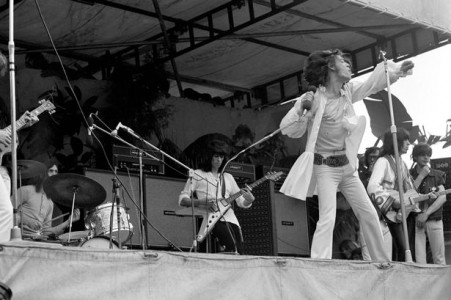 There are few bands as classic as The Rolling Stones because let’s face it, there are few bands left that are anything like The Rolling Stones. Mick Jagger even said it himself in an interview many, many years ago, he would be surprised they lasted at all. And yet here they are decades later still doing their thing and still remembered by those that weren’t even alive when they started getting big. Better yet, they’re not longer just a worldwide phenomenon, but their music has been immortalized in film as well. There’s quite a few instances in which you might hear a Stones song belting out over the soundtrack to one of your favorite movies, making you jump up and say “I know that song!”

Here are just a few interesting clips that The Rolling Stones have graced over the years.

It’s a bit hard to pin down just where this song comes in during this film but it’s one of many that seem to highlight the time period and sit well in the background. One might think that the Stones are not the kind of band that need to be relegated to the back of the bus for any film, but as a backdrop their sound is a masterful touch to this story.

4. You Can’t Always Get What You Want – The Big Chill

For a film that’s all about getting what you want and reconnecting and being grateful they couldn’t have picked a better song. There is a lot of truth that it takes a wise person to be ultimately happy with what they have and not pine for everything they believe they missed out on. Life is more about what you make it than what you want it to be, as the individuals in this film eventually find out.

Want to be creeped out at work? Want to feel like someone’s watching you no matter which way you turn? Try having a demon that can inhabit the body of anyone it touches spy on you, while you’re looking it in the eye of its current host. Yeah, chills should be running down your spine right now as the title of the song implies that if nothing else, the malevolent spirit you know nothing about has an abundance of time to do whatever it wants.

2. Paint It Black – Stir of Echoes

Imagine the last thing you hear is a Rolling Stones song. Do you think you’d try to relay that to the person that moved into the house you died in? Â Well, if your last real emotion drowned out all sense of reason and forced you to wear the song like a shroud then yeah, probably. What’s even creepier is that Tom’s son Jake, who has no discernible musical talent, actually places his father’s fingers on the exact chords he needs to recreate the song. Go on and admit it, that gave you chills.

This is another film in which the song fits simply because of the time period. Despite the obvious discrepancy between the actual time the film was set in and the opening sequence, this track spoke to a lot of change that was occurring in the country during its debut, and encapsulated a great deal of emotions that were felt across the country during this time.

The Rolling Stones just make things better, period. Their music is so uplifting that even the saddest portions seem to inspire and give people hope. Anyone that can do this with music has a gift that’s best not to be squandered.