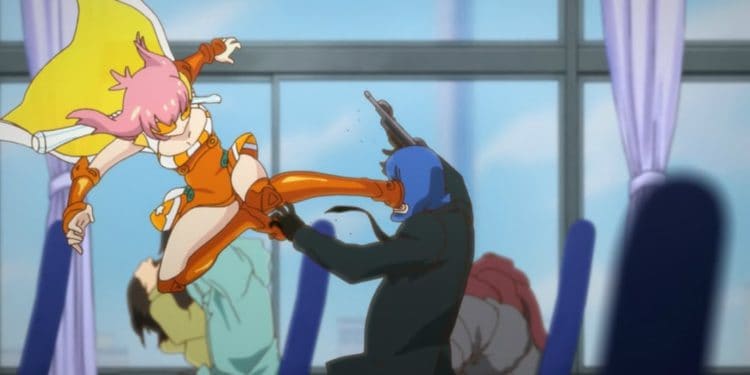 Let’s be honest here, anime can get pretty far out there to where it makes the Looney Tunes seem realistic at times. But it’s something that fans like and so therefore it’s worthy of renown. But there are some truly ‘out there’ moments in anime when even the fans have to sit back go ‘whoa’. The strange and bizarre seems to be the norm for anime at times but there are those shows that make people just sit up and pay attention simply because they either don’t conform to the norms or they go so far over the top that you can’t help but watch it again and again to make sure that you were in fact seeing what you thought you were. That’s the kind of stuff that gets attention a lot of times, even if it’s a flash in the pan or something a little longer lasting.

Here are some of the most bizarre anime shows conceived.

Space Dandy is about what it sounds like, a dandy that goes through space hunting aliens and makes references to old pop culture while trying to be amusing and entertaining all the same time. It’s almost like a high school feel with a science fiction background, but people seem to love it since it’s the kind of show that caters to the needs of those that don’t really want a big twist at the end but can handle it so long as they’re given enough pleasing images to look at along the way. In many cases Space Dandy is the kind of show that, in live action, would probably become a cult classic but not much else.

Cromartie High School is basically a school for tough guys, so when the nicest guy in the world is sent there he’s instantly assumed to be the baddest of them all since it’s inconceivable that a nice guy could possibly survive in the midst of so many troublemakers. He ends up making friends with one of the dumbest guys in the school, which serves as great insurance for his health, and also comes to realize that the school is a bit crazy in its day to day operations. This is the kind of school you might go to if you really have no skills, no social graces, and no hope other than to become a thug in one line of work or another.

You could easily argue that the title of the show is indicative of what humanity is really going through since to be honest this show is absolutely crazy and focuses upon a heroine that is set in a story where humanity is increasingly going off the rails and seems to have no hope left. The fairies are kind of creepy since they never do anything but smile and pester her, and the entire plot seems like it’s slapped together at times even if it has a cohesive meaning and direction that pulls it all together. If you really like being confused and trying to wrap your head around the mystery of anime then this would be the show for you.

This show just exists on the weird and bizarre and probably couldn’t survive without it. When Yuta’s spirit is catapulted from his body he finds that needs the help of cat spirit to harness his soul’s energy. The one trick to everything in this show however is something you might not expect and would have a lot of parents banning their kids from TV for quite some time if they were to ever see it. Yuta cannot see the same girl’s panties twice in a row. That’s right, not just twice in a day or a week or a year, but twice in a row. So basically it’s okay if he looks at panties, so long as they’re not on the same girl every time he sees them. Guess what this opens up the show for? You got it, a lot of sexualized content that parents would likely flip out about.

This is what you get when people think up the idea of what might happen when a government decides to ban swearing and pornography at the same time and then attempts to regulate it. Sounds crazy and not at all realistic right? Well think about it, if people couldn’t swear and couldn’t watch sex in any way shape or form, then it seems like a lot of people would just cease to exist right then and there. It makes a lot of sense even if the show doesn’t, as the base and carnal nature of humanity is something that a lot of people might not like but is still pervasive enough that you can just barely think of what life would be like without it.

Anime is known for being a bit crazy, but these shows knock it out of the park.