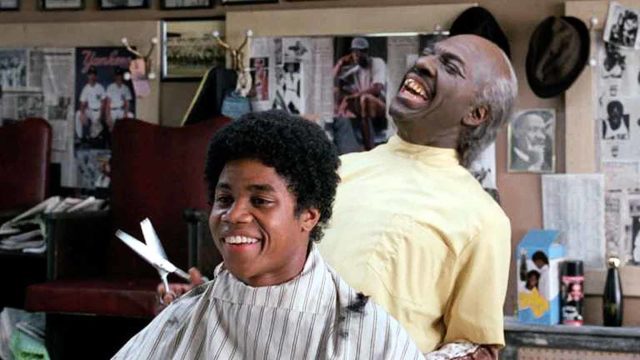 There are barber shop scenes in movies that just make you laugh and want to keep watching for the chance to see more since they’re that hilarious and filled with the kind of back and forth chatter that you can associate with such places. The old school barber shops where people came to just sit and pass the time while they either got their hair cut, face shaved, or just sat talking to people all day is on its way out it might seem, but we can still enjoy it in the movies. Such scenes were the hallmark of the times at one point and are still fun to see now and again.

Here are just a few of the best of them.

Ed Lover and Dr. Dre weren’t really the best at anything, but when their employer and benefactor was gunned down they decided to become cops so that they could right the injustices of the neighborhood. The only problem was that they weren’t that great at being cops either. Eventually they would go back to styling hair after their stint as cops was over and done with, but they still weren’t that great at it.

This is kind of a twist on the idea of a barbershop since once you learn the nature of the cobbler you come to find out that so many things within the city are interconnected that it’s hard to know just who doesn’t know about who anymore. Apparently barbers are good friends of cobblers, who are the keepers of souls, or soles depending on how you want to look at it. But it seems to fit, in a way.

When a man just wants a bath and a shave after coming in out of the dust and grit from the trail it’s usually a good idea to just let him be and don’t be a bother. Of course the three town tough guys that were hired to be bullies didn’t seem to think that was the best idea. Unfortunately they had to find out the hard way that Clint Eastwood really doesn’t appreciate being so rudely interrupted when it comes to getting his shave on.

This is the kind of barbershop where you have to know how to talk smack, and when, to really survive. If you don’t have a big mouth and can’t possibly defend yourself with an acerbic wit that could be your saving grace, then you probably shouldn’t walk into this place to start with. Plus, if you’re any other color than those who work there and frequent the place you might need to have an extraordinarily thick skin and a lot of patience, because chances are you’d be hassled up and down just to get a reaction.

The old man barbershop quartet is one of the best in all of film. They argue incessantly and they argue over matters that no one else really cares about. But the fun part is that they’ve likely been doing it for so long that it’s just a regular part of their day that they couldn’t possibly do without.

Oh to visit a barber shop and just listen to the atmosphere. It’d put a smile on a lot of faces.