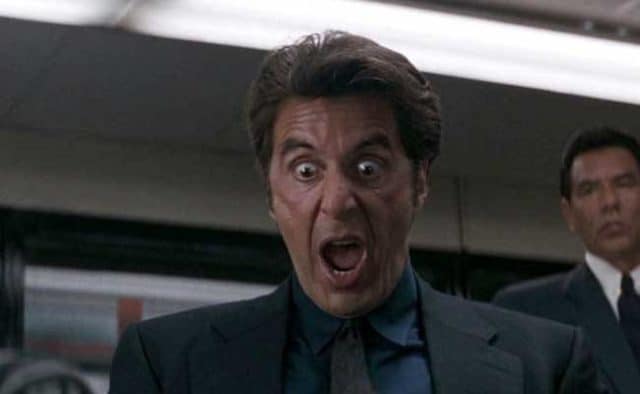 Funny and Al Pacino don’t seem to go hand in hand. There are funny scenes with him in it but they’re kind of few and far between since he’s almost all drama and some kind of action and very little comedy. The chances are good that you’ve laughed at some of his acting but it’s also very possible that the moment wasn’t supposed to be funny at all, it just happened that way. In any case, Pacino isn’t a comedian obviously, but he can pull a quip out of the air from time to time and make it work for him.

Several of these are more dramatic than I might be giving them credit for but this one, oh this one, this is a classic speech that had me in tears as I laughed my way through it not because it was hilarious, but because it was so true. Watching an uptight dean of a school get dressed down by a broken down blind man is a bonus with this clip since it shows just how little people seem to understand that other folks are just as capable a they are despite a handicap. This is always a pleasure to watch.

Unless you have a really sick and twisted sense of humor this movie isn’t really funny at all. But this scene right here when he tells Manny he should have just kept his mouth shut is pretty funny. For the record Manny was a good character but he didn’t have a big personality. He was all about women, making money, his friends, and women. Yes, he really, REALLY liked women. But he was a stand up kind of guy for a drug smuggler.

Pacino plays the kind of friend in this movie that most people would wonder why they keep him around when all he does is cause trouble. The answer is simple, because he’s a good friend no matter how messed up he gets or how much trouble he causes. Plus the small group of friends has one of the best sayings that’s ever been heard in the movies, and you listen to it again and again on this clip.

In many ways this movie is funny simply because Pacino upstages Reeves without much of an effort. I like Keanu Reeves but in this movie he felt woefully short of the mark that Pacino had set. He got in a handful of lines for every speech that Pacino snapped off in his customary fashion of laughing now and again during the telling. That’s how good this guy is, he can pause at just the right time and make you laugh and then keep going with his story.

This obviously wasn’t meant to be a funny moment in the movie but it made me laugh all the same. I mean come on, you can take a guy’s wife, his home, but don’t you dare take his TV. That’s just crossing a line you don’t want to know about.

Al Pacino is his own kind of funny.