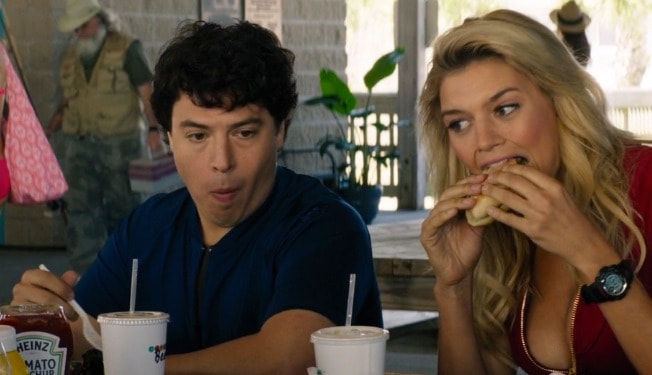 Sometimes it’s all a matter of product placement as you see here in the photo above from the most recent Baywatch movie, and then there are moments in movies when even a condiment can be a part of the action and be given a little more importance. Ketchup isn’t what a lot of people think of when they tend to look at comedy but given that it’s something that can be used in many ways it’s definitely a substance with potential. While some folks don’t even like putting it on their hot dog, especially since some have a sugar content that’s out of this world, others find it to be something that can be infused within a scene to make it especially funny, not to mention memorable in its own way. While ketchup is probably one of the most basic and overused sauces within the wide range of flavorful and available condiments in the world it’s one of those that’s been around long enough to be something of a mainstay in pop culture, whether it’s just for use as a prop or part of the overall story.

Her are some of the funniest moments in movies featuring one of America’s favorite condiments.

Chris Farley and David Spade comprised one of the best comedic duos in their time that when Farley passed away Spade kind of just hit the skids as far as his comedy went for a while. He’s still a funny guy and all but this movie was without a doubt one of the greatest of all time and cemented their legacy together. Tommy is one of those guys that just seems to drift through life, getting by on the fact that he’s got a bunch of friends, a comfortable life, and not a lot of responsibility. But when he and Richard have to go out and try to save the company after his father dies it becomes a journey of epic proportions that takes a heavy toll on both of them in the funniest way possible.

Sure there’s a lot of swearing and a lot of material in this movie that’s not fit for kids despite the fact that it’s animated, but the movie itself is pretty hilarious if you’ve got a dark sense of humor. While it doesn’t focus on just the ketchup there are a couple of scenes in which the red condiment is pretty prevalent and this is one of them. What’s funny about it is that you don’t really look at the various aisles in a grocery store and think about what the jars of mustard and the bottles of ketchup are going through being made to stand there all day and night, not knowing what’s going to come……because they’re condiments. It makes sense.

In the history of slapstick there are a lot of movies that would be deemed as some of the best in the business, but Dumb and Dumber was definitely one of them that took the cake back in its day. This whole scene evolved when Lloyd and Harry dared each other to eat a hot pepper only to be called out by their passenger. Of course when you’re not ready for a hot pepper the heat can sneak up on you and then pimp smack the inside of your mouth with a force that seems as though someone lined your gums with kerosene and lit a match. It’s debatable as to how much ketchup helps since quite honestly it might seal the heat inside more than anything.

It’s one thing to act tough when you think you have the law on your side, it’s another to realize that you’ve just pissed off a couple of bikers that would love to use your skull as a soccer ball. But it does make for a very funny scene when Martin Lawrence’s character, thinking he’s got the high ground against a couple of rough and tumble bikers, decides to tell them off in a fashion that’s usually reserved for those that are actually in the clear and have nothing to worry about. The reaction of his friends behind him seems to indicate that his actions aren’t all that wise or even warranted since, well, there’s a lot more Del Fuego’s than just these two in the movie.

Bobby is trailer trash. No literally, he lives in a trailer with his family near the school. Plus he plays the kind of character that is kind of the stereotypical frustrated boyfriend that just wants to get laid but can’t since his girlfriend wants to wait for that perfect moment. But all in all this spoof movie was one of the best in this franchise since it introduced something that a lot of people found they couldn’t do without once it was released, which is probably why the second one was quoted even more than the first.