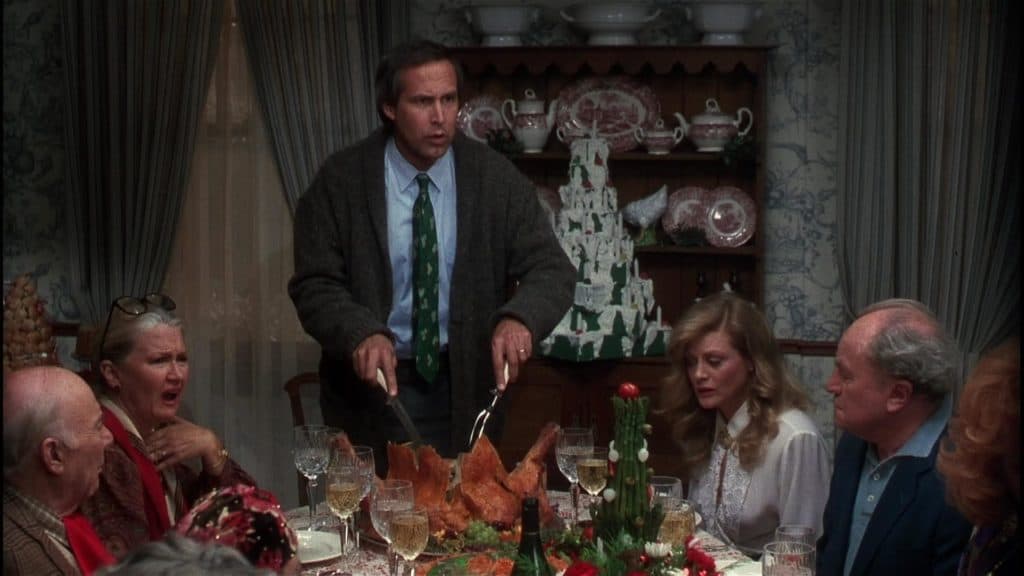 Dinner with the family can be a stressful time but it can also be hilarious as a result, even if you’re not the one laughing. In the movies, we’ve seen plenty of dinner scenes that have erupted into a great deal of drama and we’ve also seen scenes that have been insanely hilarious since at the end of the day a lot of things can happen at the dinner table and a good number of them can be so funny they’ll make a person choke or do a seriously gross spit take. But the point here is that the antics that go on at the dinner table can be both great and entertaining since they’re when shown in a movie they’re bound to be so far out there that trying to imagine them happening in your own home might be kind of a stretch, even if it’s possible that some of this stuff could very well happen. Just be thankful that we can laugh at such things since there are plenty of movies in which a person might not find the humor that funny, but would be in the minority when it’s found that their sense of humor is lacking.

Here are five of the funniest dinner scenes from movies.

Is there anyone out there that thinks of this scene if they chance to hear Harry Belafonte singing? This song was used in such a perfect way in this movie that it’s been a part of public memory for a long time now and it’s still one of the best scenes of the whole movie. There was talk of a Beetlejuice 2 coming out but so far that’s all it’s been unless someone is developing the movie and is keeping everything as close to the vest as possible. While there might be some grounds for another movie the first one is likely going to be thought of as the best for a long time to come since Michael Keaton and the rest of the cast did such an awesome job.

4. The Best of Times

This movie is a lot better than a lot of people tend to realize since Robin Williams and Kurt Russell were great together since their different talents complimented one another so well. This particular scene was great since Jack, played by Williams, was adamant that in an attempt to get back with their wives and a desire to watch football that they could have both. Reno, played by Russell, went along with this reluctantly, knowing it would go awry, but when Jack couldn’t contain himself during an amazing play the game was up and their wives kicked them out the door yet again. As football-themed movies go this is one that people should watch at least once.

Is any Christmas season really complete without playing this movie at least one time? A lot of the actors have either passed away or passed into obscurity at this point, apart from Johnny Galecki and a couple of others, but the movie still has every bit of the charm that it once possessed when it was still new and people were still excited to watch it. The dinner scene is one of the best since just about everyone can pick out a person at the table that reminds them of someone from their own family. It’s either that, or they’re grateful that no one in their family is quite as eccentric as the Griswold clan.

Out of all the ways there are to make fun of people, this feels like one of those that’s most likely to backfire since all it takes is one person that knows the secret to ruin everything. But it was a nice showdown between two men that had entered each other’s lives on a very sour note. Plus, this scene is actually pretty funny since watching two grown men having an imaginary firefight in the middle of dinner is hilarious and was bound to make a lot of people chuckle or bust up laughing at the sheer ridiculousness of it. Admit it, watching the two go at it like this was kind of funny and made the dinner scene even more worthwhile.

Making a good impression when meeting your significant other’s parents is obviously something that a lot of people worry about, especially if this is the person you intend to marry since otherwise, it might be that you’re marrying into a family that will make your life miserable for many years to come. But when your soon-to-be father-in-law is an ex-CIA operative it’s easy to guess that life is about to get a lot harder and much more stressful than it’s ever been.

Dinner can be a fun time, but in the movies you can at least change the channel or turn the movie off.