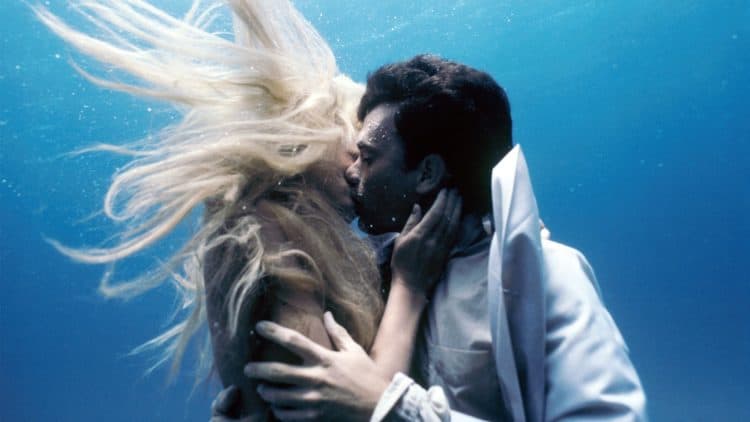 What is it about underwater scenes? Some look hokey as hell, but others you can’t help but remember since no matter if they’re a bit corny or over the top, they still stick in your memory for some reason since they’re meaningful in some way. Much like anything else in movies a good underwater scene can be a little tricky since it’s either bound to be laden with CGI effects or it’s going to be tough to get since the ability to film underwater is no longer an issue, but it’s the matter of whether a film crew is going to be headed to the real world to get their footage, where there are a lot of variables that can’t be controlled one hundred percent, or if they’re going to film in a controlled environment that could end up looking a little too staged for the liking of the audience, who aren’t always as easy to fool as people might think. For those that know enough about how underwater environments should look this can pose a problem. But if the underwater scenes are more figurative than literal, there’s a lot that can be done in terms of artistic license. In short, underwater scenes depend on a lot of variables, but the ‘why’ of them is sometimes the most important.

Admittedly this is an odd pick since the majority of this movie has nothing to do with water, but in this particular scene when Mickey is getting the ever-loving hell beaten out of him it feels pertinent since he takes a hard uppercut that sends him crashing to the floor, and into a metaphorical scene at the same time. The underwater scene, as many agree, is to give a sense of detachment, that Mickey has essentially left his body behind for just a moment as the beating has finally taken its toll. But obviously, it wasn’t enough to keep him out of the fight since he comes racing back and finishes the fight with one massive hit.

4. Pirates of the Caribbean: At World’s End

I almost opted for the first Pirates of the Caribbean since the zombified pirates walking underwater and being exposed by the moonlight was tempting to showcase, but the idea of a ship needing to be flipped upside down to enter back into the mortal realm was kind of fun and felt like it was possibly a little more challenging when it came to effects. The movie itself was, I believe, one of the stronger of the series since it brought a bit of finality to the story even though things were continued from that point, much to the chagrin of a lot of fans. It did see the end of Davey Jones and the passing of his mantle to someone that would actually take the job seriously.

Tom Hanks, Eugene Levy, and John Candy made this movie what it was while Daryl Hannah was great but somehow muted throughout the length of it despite being one of the main characters. To say that she was great in the movie is easy, to say that she was dominant is kind of difficult to justify. The movie is still one that a lot of people enjoy since it was a fun story, but if one is trying to push the idea that a human could suddenly start breathing underwater because a mermaid made it possible then there are a lot of story ideas that would be a lot more feasible. It’s one of the classics, that much is obvious.

One thing about this process when watching the adamantium being injected into Logan’s body is that a person has to remember that this is hot, liquid metal that’s being fused to his skeletal structure, and that means that everything around his bones would be heating up and taking damage as well since it doesn’t feel as though Stryker was too concerned about Logan’s comfort. What that also means is that he’s literally being burned from the inside out and healing at the same time, which would be something beyond any torture that anyone could possibly withstand if they didn’t have the type of healing factor that Logan possessed. Is it any wonder he’s a little pissed when he comes busting out of the water? Obviously that wasn’t the only reason, but it likely helped to motivate him.

Billy Tyne was an old-fashioned captain without a doubt, which meant that he had no illusions about what was going to happen when the Andrea Gale started making her descent to the bottom of the sea. He knew he was going down with the ship as her captain, as that’s something that’s been seen to happen more than once in the past and is still something that’s believed by many sailors today, even if it’s not always practiced.

Underwater scenes can be silly or serious, it just depends on the movie.