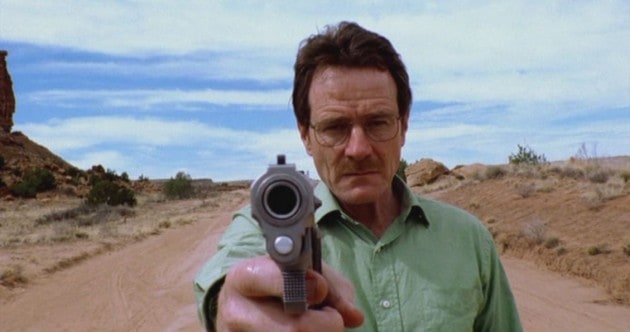 The opening to a show can set the entire pace of the series so long as it doesn’t make promises it can’t keep. The more powerful it is the more people are going to sit up and say “hey this might be worth it”. Any good show that’s worth that opening one-two punch will lead off with something that makes the audience think that they’re missing something crucial to the story and will keep them in their seats as they either binge-watch to make sure they haven’t missed anything or wait patiently for each new episode to arrive.

The whole point is getting them to watch, and openings such as these have been proven to work beautifully.

The scene opens on a greenery-covered hillside upon which we see weapons, shields, and a lightning-blackened tree that stands top the rise. Ragnar stands upon this hillside as well, covered in blood and with a mild wound upon one shoulder as he surveys the field. It isn’t long until he is attacked by an enemy as he defends himself and, with the aid of his brother Rollo, finishes off his opponent. This is a perfect lead-in to this type of show.

If the dead bodies that were carved into pieces didn’t give you the idea that something is wrong the dismissal of the Night Watchman should have made the hairs on the back of your neck prickle. Something was terribly wrong in the ravaged camp that the first crow noticed, but of course upon their further inspection the bodies are gone and he is made to look like a liar. That is until the blue-eyed demons known as the white walkers appear, and then all bets are off.

The scene begins with a serene look at a desert bluff along a dusty, winding road that leads to where we don’t know. Then a pair of pants flies through the air, catching a strong breeze before they are blown to the ground by a passing motor home that speeds along the dusty trail. As we get a look inside we see a man stripped down to his underwear driving the motor home like a madman and wearing a gas mask. To his right there is another man wearing a gas mask, obviously passed out. All is not well.

This is one of the calmer openings but it is powerful simply because we hear the sound of screeching tires and then the sickening thump of metal against flesh. A dog whimpers and whines as the sound of a car speeding off can be heard. Enter Frank Underwood and one of his protection detail that eventually goes back inside to call for help. While he is gone Underwood snaps the dogs neck, ending its misery but making a point that he cannot abide weakness.

You can see all is not well in this opening scene as the camera shows wrecked cars that have been sitting long enough to collect rust. There are dead bodies in some of the cars that are to be round on the road as flies buzz about them in droves. It’s only when the sheriff notices a young girl shuffling uncertainly down the road that we get the idea that something is wrong. When she turns around and shows that a rather big chunk of her face is missing and her eyes are glazed over we know that stuff just got real.

A powerful opening can cause the audience to pay close attention even if they want to look away.