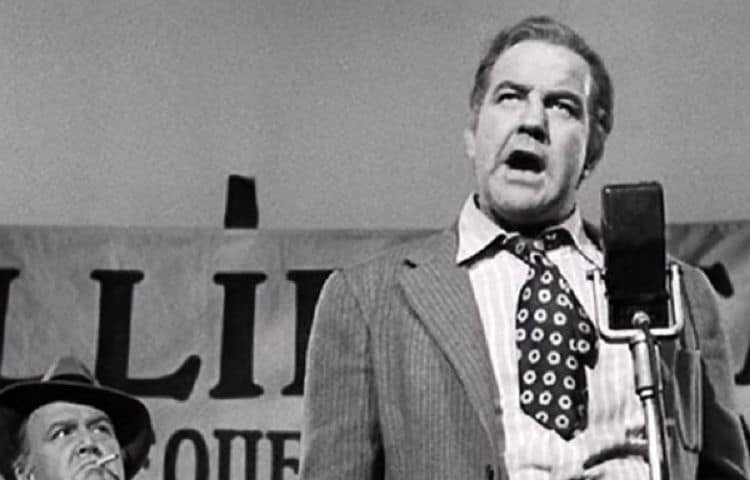 Anyone that’s ever had to make a last-minute change to anything knows how irritating and how frustrating it can be, and in the movies, it can be even more nerve-wracking since one has to imagine that the deadlines and the expectations that are placed on a person have to be insanely stressful now and again. But every now and then, more often not really, last-second changes can end up saving a movie since it might have something to do with casting or simply the way a movie ends that might keep it from being vilified and torn apart by critics and fans alike. Quite a few people will probably argue that some changes should be left alone and that they aren’t needed, but others might agree that said changes did in fact make a movie better since had they been allowed to go forward as they were then it’s very possible that many movies would have tanked rather than become the great stories we remember today.

Here are just a few movies that were made better by last-second changes.

5. Bringing in Hugh Jackman kind of assured the popularity of the X-Men in movies.

A lot of people know the story at this point of how Dougray Scott had prior obligations to fulfill and despite being cast in the first X-Men movie he wasn’t able to fill the role of Wolverine. That meant that a relatively unknown actor by the name of Hugh Jackman had to step in when called upon to do so. Fans are undoubtedly glad that he did since he ended up becoming the famous Canadian mutant for years afterward. It’s a decision that a lot of people are glad to see since trying to see anyone but Jackman in the role at this time is a little too difficult given that he was a great choice for the part.

4. Broderick Crawford kind of saved All the King’s Men.

Sometimes it’s just a matter of getting the right people and letting them do their thing when it comes to a movie since, to be honest, trying to micro-manage too often can lead to serious mistakes that might compromise the whole project. But while there were other issues at play with this movie, considering that it was way too long, to begin with, the acting is what saved this movie in a big way, and while cutting it down over and over to create a tighter and more concise story was a great idea, it was also easy to think that the acting played its part. Every element has to come together in a cohesive way to convince the audience.

3. Judd Nelson was a last-minute addition to The Breakfast Club.

Imagine John Cusack in the role of John Bender, or Emilio Estevez, since he was the original choice to put in the bad boy role. It doesn’t quite work, does it? Judd Nelson had that bad boy image that John Hughes was looking for, while Estevez played a great jock in his time. Even the role of Claire was up for grabs at first since Molly Ringwald was initially supposed to take on Ally Sheedy’s role. Things would have been a lot different if these changes had not been made. Some of the most iconic movies from the past would have been very different and possibly not as memorable as they came to be.

This ending was tested and was found wanting since Audrey II went on a rampage through the city not long after eating the last two people in its way. But apparently people didn’t like this ending and it was scrapped despite the fact that it had cost around $5 million to create. That’s an expensive attempt that didn’t go anywhere to be certain, and yet Frank Oz went back and redid the ending to make certain that people would appreciate and agree with it since of course, the villain always has to lose. That idea is still pervasive today, even though some folks appreciate seeing the villain win now and again.

1. Peter Jackson had to scramble to cast Aragorn.

No, Viggo Mortensen was not the first person to be considered for the part of Aragorn. Instead, Jackson wanted Peter Townsend to start with, but he eventually realized that Townsend was a bit too young and didn’t fit the profile. Russell Crowe was considered, but he didn’t want it, and up until he noticed Viggo Mortensen, Jackson was kind of at a loss as to who to put in the movie. But obviously, when Mortensen looked at the role and took it, things started to move forward in a big way and the movies turned out to be a lot of fun. It can take a while, but finding the right actor for the right role is important.

There’s nothing like the pressure to make that last-second change.