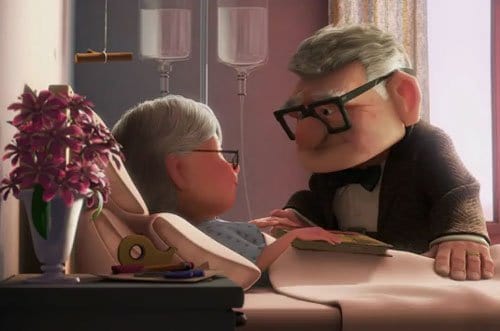 You wouldn’t think that a cartoon could ever make you cry, but there are scenes in Disney movies during which you can’t help but feel as your eyes tear up and your emotions start to go a little haywire. While Disney tends to put a lot of unreasonable expectations on nearly every aspect of life there are moments when they get it just right that it plucks at your heartstrings and doesn’t stop strumming until every last tear is shed. You tough guys out there can go ahead and admit it, especially if you’ve ever lived through anything similar to the clips below. Go on and bawl a little bit once more when you watch them, no one’s watching.

It’s okay to feel something, honest.

Throughout the beginning of the opening montage to Up see Carl and Ellie being as happy as anyone could possibly be. Then we get hit with the fact that Ellie can’t have children, and some of us no doubt teared up a little because let’s face it, that’s about as hard a hit as any woman could possibly take and survive. Even after they reconcile with this fact we’re shown later how Ellie eventually just can’t go any longer, and must exit the story in a painful but peaceful manner. I felt my heart clench at that moment, how about you?

4. The Hunchback of Notre Dame

In a world where people objectify beauty and glamorize the exotic, Quasimodo was undoubtedly something else. But the guy was having such a good time, only to be brought low and humiliated by the guards and the crowd. Worse still, his master allowed it to happen, citing that a lesson needed to be learned. If any tears were shed at this moment, and I’m sure there were, a few of them were undoubtedly out of anger at such an injustice.

Separating a mother from her baby seems like, and is, an intolerable cruelty that should never have happened. After all the ill-mannered children that were abusing Dumbo had a sound thrashing on the backside coming, Dumbo’s mother just spared their parents the trouble. This is probably why zoo’s have glass enclosures and wide, walled-off habitats.

The loss of childhood is painful to contemplate. But the final goodbye to those things we loved the most and depended upon is a heart-rending moment that you can’t help but tear up at. Bing Bong wanted so badly to reconnect with Riley but when shown an image of her began to realize she wasn’t the same little girl he remembered. In a final act of sacrifice he gave up that last connection to insure Riley’s happiness, which was always his biggest concern.

If you didn’t at least feel your eyes tear up at this then I don’t know what to say. Mufasa’s death was like a body blow to most of us and a heavy reminder that even in the Circle of Life things get a bit brutal at times. Obviously it’s a Disney movie so we wouldn’t get to see a trampled corpse, but the mere fact that Mufasa was killed by his own brother is enough to temper those tears of grief just a little.

See? Even now you teared up. Just admit it.