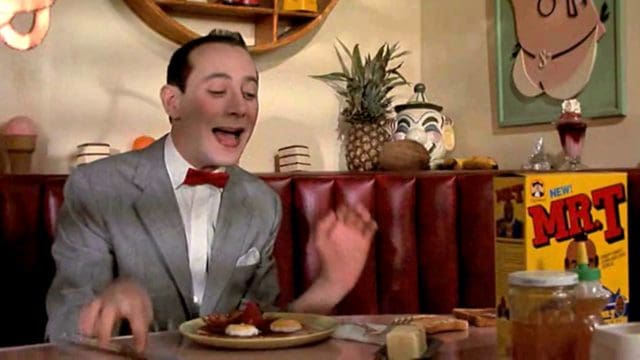 It’s the most important meal of the day and more than that, it’s the foundation of a healthy diet. Yeah, watch these clips and then tell me you still believe that Hollywood knows about a balanced diet. Breakfast isn’t usually the time you expect to be funny or experience a comedic moment. You’re still waking up, you’re tired, and it takes whatever energy you have to just move your jaws up and down to make sure you don’t choke. But on the bright side you tend to wake up a bit more once the food hits your system.

Here’s a few clips showing how breakfast should and probably shouldn’t be done.

If you’re experiencing the same day over and over it’s reasonable to assume that you don’t need to worry about calories, right? Honestly if you just wake up the same as you did yesterday and the day before you should be able to do absolutely anything you want and, yeah, just go back to start. Despite the fun you could have everything might start to seem a bit canned once you’ve done it a hundred times or more. That begs the question though, how many days did Phil really spend killing his body with calories? Would it even be worth counting?

Just looking at this gruesome mixture seems to make my fillings ache. The cloying sweetness is enough to send a person rocketing into a diabetic coma from the mention alone and the simple fact that Will Ferrell actually sticks the morass of sugary, saturated noodles in his mouth is enough to gag. More than that, there have been people that have actually tried this recipe just to see if it was any good. Know what they came up with? A mess of soggy, sugary sweetness and a pile of noodles that didn’t absorb so much as an ounce of flavor.

Wake up, do a hit, blow someone’s head off, clean it up, and then head on out for breakfast. All in a day’s work right? After that mess in the back of the car I’m not sure my stomach would be up to bacon or any other sort of meat product. Vincent must have a cast-iron gut if he can sit there and eat a meat product after what his hands have been touching. It might be a better idea to go with a muffin or a danish and call it a day.

Someone needed to enlist Uncle Buck to feed the homeless or the hungry, because quite honestly the guy knew how to cook for a neighborhood worth of people. One flapjack would have been enough to feed about four or five people to the point of bursting, and the mountain he made could fed nearly every mouth in the neighborhood and still been enough for seconds. This would be kind of uncle I’d like to see at a family barbecue. To heck with steaks, we’d be grilling a whole cow.

It’s genius, it’s innovative, and it’s ultimately so wasteful you almost want to grab Pee Wee by his bowtie and shake him just for the fun of it. Give him props though he’s obviously got the type of bank roll that allows him these kind of eccentricities. And as a kid you can easily admit that this was awesome to watch. As an adult it might be interesting to see if someone could make a few upgrades. What’s Tim Allen doing these days?

The breakfast scenes in films are usually meaningful or fun, but they’re almost always entertaining in some way.